The Perils of Plastic Ta Ta's 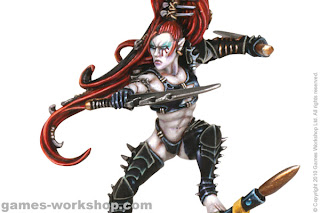 That is a photo of the new model for Lelith Hesperax .  Already my title is a little off, as she will be in metal, but whatever.

I was reading through the Dark Eldar rumors thread on Dakka, and there was a massive argument that developed with people either upset by or claiming their right to fawn over the boobage/anatomy of little miniatures.  Furthermore, some people were complaining about the fact that the new Dark Eldar models didn't have enough boobage.

COME THE FUCK ON.


We're a hobby plagued by stereotypes and social norm violations of epic proportions.  People who don't wash properly, who don't wear deodorant (or take back-up deodorant with them to the damned tournaments they attend), people who basically fantasize to little toy soldier boobs, etc.

There is absolutely no reason for perversion, poor hygiene, etc. to have a more rightful place in OUR hobby than anywhere else.  Now, hey, who am I to judge what others should or shouldn't do ... I know, maybe I'm being judgmental.  But ... seriously.  Seriously you guys, seriously.

This is actually worse than playing with your sister's naked barbie dolls.  Stop complaining about them not being feminine or booby enough; stop admiring that you think they ARE feminine/booby enough.  If you'd like, I'd be happy to spend some time talking about how to go to a bar, strike up a conversation, and end the night admiring some REAL tatas (or at least some silicone ones).


In relation to this, make sure you shower and put on deodorant first.  Oh, and shave your neck.  At least.

PS - In other news, the new Dark Eldar rules and models are pretty rocking.  Yay new codices!
Posted by Mike Brandt; mvbrandt@gmail at 6:32 AM