I just wanted to give a big congratulations to James and Samantha Watkins on the successful birth of their baby girl and firstborn child.

James and Sam worked tirelessly to support the NOVA this year.  They were there almost every single day we worked on terrain and tables and the like.  Sam sat 9 months pregnant and stuffed swag bags.  James repeatedly got staples and paint and all sorts of other things all over himself helping us drybrush and base paint and form and cut and build a million hills and buildings and everything else.

These are two of the finest people I've ever been blessed to know.  They mean the world to me, and I just have to share my excitement and joy at the growth of their family with ya'll.
Posted by Mike Brandt; mvbrandt@gmail at 12:53 PM 7 comments:

All bracket winners, full results, paint scores, etc. etc. etc. for all events should be releasing in the next couple of days.
Posted by Mike Brandt; mvbrandt@gmail at 7:15 AM 13 comments:

Off to the NOVA - LIVE FEED LINK - REPOST PLEASE

All bloggers, forum posters, etc., please repost this and keep it "alive" all over ... you can tune into the NOVA Open Live Feed starting tomorrow at around 6:00PM, and it'll be "up" for the majority of the Open thereafter, including the Whiskey Challenges on Thursday night, Invitational all day Friday, and the Open on Sat and Sun.


Posted by Mike Brandt; mvbrandt@gmail at 4:50 AM 3 comments:

EDIT:  Brother Loring, a British or Welsh or some odd fellow, is looking for a roomsharer for the NOVA.  He'll be flying across the Atlantic on short notice ... anyone able to share?  Need to know ASAP!  E-Mail mvbrandt@gmail.com

So, this year has a bevy of Whiskey Challenge match-ups for ya'll to enjoy at event and from afar via live cam ... here's how they pan out in no particular order:

PS - I apologize for the lack of polish on the writing here ... I am going CRAZY with a million little nitnoids to wrap up here in the last day before I move into the Hyatt for the NOVA.

1. Dash of Pepper, Justin Hilderbrandt, of Dakka infamy, GT fame, and They Shall Know Fear blog
vs.
Troy Esposito, who posts on Dakka as Grimwulfe

These guys are going at it Dark Eldar vs. Space Wolf.  Troy took up Dash's challenge that NO Space Wolf player can possibly beat his Dark Eldar.


2. Stelek, aka Andrew Sutton, of Yes the Truth Hurts
vs.
Mike Somerville, a DC local who took "Best Guard" at the Throne of Skulls, and has the St. Omerville Blog

Andy and Mike have gone at it a little on YTTH, as Andy criticized Mike for even talking about "winning" "Best Guard" at Throne of Skulls.  There's also talk of Somerville possibly bringing Footdar ... or perhaps Necron?  Or maybe he'll just attempt to show Stelek what Best Guard really means.

I think they are playing for pinkslips.  Whichever side wins, they take over the other side's podcast!  Or ... maybe they're just playing for cash.  Either way, I hear Romeo waffled out of competing, and put in his right-hand-man Kyle.  Pat Higgs, the chief interview guru for 11th Co, is taking them on using his Daemons.  Or I think he's using Grey Knights.  WHO KNOWS.  Either way, expect shenanigans aplenty.

4. Chumbalaya, aka Jeremy Chamblee, of Blackjack and Hookers the Blog
vs.
Xaereth, aka Adam Tricola, an Invitaional qualifier, blogger at Delusions of Grandeur, and Dark Eldar fellow of ill or high repute (Depending on who you talk to!)

These guys are not only playing each other and hailing from geographically disparate areas of the country, but they're sharing a room together at the hotel.  I don't know if this will be a deathmatch or a love fest ... I'm kinda grossed out either way.

Well, he calls himself that; also known as boy wonder Nick Nanavati, of the Brown Paintbrush blog

These two know each other ... much the worse ... and I think they're both even playing Grey Knights.  May the psyflespam begin!  At least they both paint gorgeous armies!


6. ManBoyGenius, aka Rob Baer, aka SpikeyBits ... who blogs at the Spikey Bits blog, and is well known on the tourney circuit
vs.
JAWABALLS, because I had to caps it, aka Chris Dubuque, of the blog ... well ... Jawaballs, plus Games Day Banner wins and Heroes of Armageddon and other sorts of artistic and competitive fame


Chris and Rob apparently go way back, but haven't played in some time (since Rob lived up in the Long Island, NY area of the world).  Two GT regulars going at it.

Both of these guys are using variant White Scar lists against each other ... and they both post for the White Scars blog ... and they don't actually know each other in person (yet) ... Stillfrosty is also qual'ed for the Invitational the next day.

These two well-known names from the blogging / internet world should have an interesting game together ... mobile guard against ... perhaps ... Tyranid.  Unless Fritz wants to bring a different list for the Challenge match.
Posted by Mike Brandt; mvbrandt@gmail at 7:40 AM 9 comments:

Awesome awesome wrecked Wave Serpent / Ruins terrain, brought to you by James Watkins and Bob Likins (the Rogue General Hunter).  These guys were with me every step of the way on the terrain build, and really spearheaded it in some key ways.  Bravo ...

We honestly got a very late start on sponsor pursuit, but we had a bunch of great ones hit the surface to help us out.

There are a TON of things in our swag bag, and I'm not going to show you pictures of most of them, but I thought I'd share a couple ...

Swag is rolling in, mass project stuffing the bags tomorrow ... sorry for photo quality, it's a crappy 'old' Droid.

Partly sponsored by Warstore, double-LED + laser pointer all metal keychains (these are sweet, and way cooler even than last year's long-lived pointers): http://www.novaopen.com/wp-content/uploads/2011/08/IMG_20110819_161425.jpg

There is a TON more in every swag bag ... scenic bases and magnets and snacks and tons of bitz and all manner of goodness. Don't want to give EVERYTHING away.

Up for a spontaneous trip? A small handful of 40k GT spots left due to last minute drops, plus there's the trios team tournament, malifaux, warmachine (Each with just a couple spots left), and just a ton of open gaming and fun stuff to do!
Posted by Mike Brandt; mvbrandt@gmail at 1:40 PM No comments:

These are the final drafts of the Appearance Scoring Rubric / Explanation for 40k and Fantasy events at the NOVA 2011.

Just to keep the images rolling, here's a shot of one of our more esoteric foam-based pieces ... a bunker that's been busted through by a Devilfish:

Posted by Mike Brandt; mvbrandt@gmail at 11:02 AM 3 comments:

Many new posts coming this week, including sample NOVA Open battle reports, updated FAQ and final packets for the Invitational and Trios Team, plus a couple of editorial revisions to the primary GT packet.  Fantasy final packet will also release, and we'll re-up the Malifaux and Warmachine/Hordes Packs.

Information on the DC Bar Crawl and other things will also be up here.

As far as ruins go, here's a link to Bob Likins' Rogue General Hunter blog ... Bob's one of a handful of guys who've given countless hours to helping the NOVA finish making up for an unexpected terrain donor loss only a couple of months ago ... we now have over 1010 pieces of 40k terrain ready to go for the 2011 NOVA Open ... crazy.  Here are a tiny handful of them ... 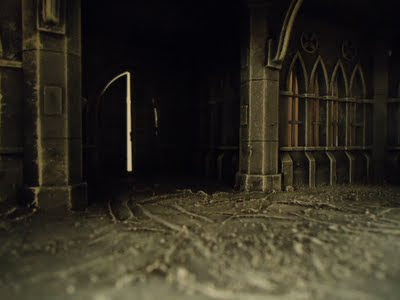 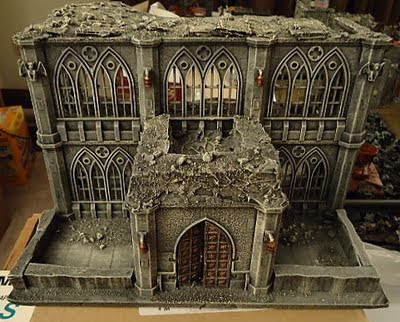 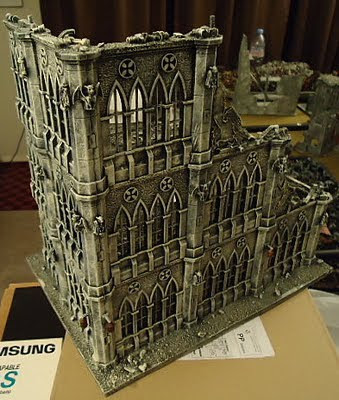 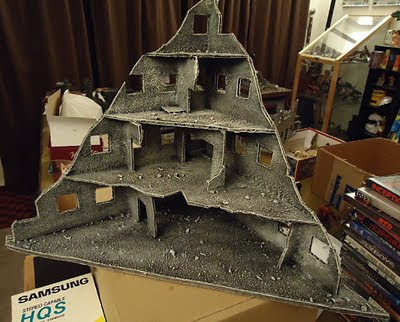 Posted by Mike Brandt; mvbrandt@gmail at 5:09 AM 4 comments:

Please review, playtest, enjoy, and reply with any curiosities or questions or typos!
Note that amendments made for typos/etc. will show up in the guide books for each attendee in appropriate final version.

Mission order will not change.  Final Team Tournament and Invitational Packets are being dusted off.

Yesterday we finished 100 buildings and area/scatter terrain pieces.  The 40k tables will be populated with 896 pieces in total of terrain.

Here's a rando snapshot of a few of our simpler / foam / foamcore pieces ... (which still look pretty nice!) 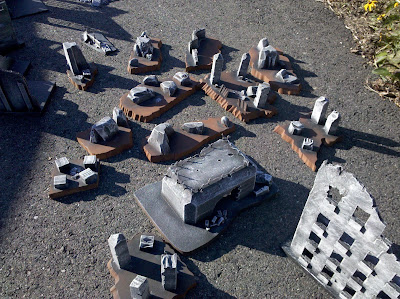 And here's a rando shot of some of us felting tables in 100 degree heat.  I'm in the green. The things we do for ya'll! 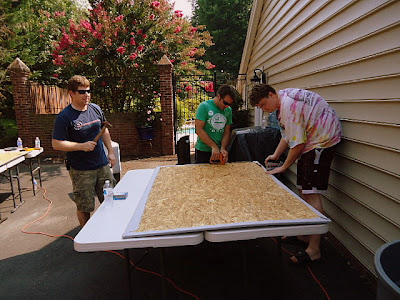 Also, we're contemplating releasing an item-generic budget for all to peruse ... thoughts on doing so?  We still field some people thinking that $100 for a 40k spot is too pricey, that we must be pocketing a profit.  I'm not sure if it would be a positive or negative thing to share with the general viewing audience exactly how much we are makin ... er, losing on the NOVA 2011 :)

And because it's a good day, here's a lol for the day:
http://www.explosm.net/db/files/Comics/Dave/comiciwannagrowupnew1.png
Posted by Mike Brandt; mvbrandt@gmail at 4:22 AM 11 comments: