Our newsletter for Dec 15 - worth reading! TONS of information!

EDIT: I've gotten a couple comments, from folks asking why we're so early with this. Believe it or not, planning for each year's NOVA begins one week after the prior NOVA! It's a year-round cycle of hundreds/thousands of volunteer hours, playtesting and hard work. So, this year all our potential attendees get to join in and have a long-term say in how our missions and playtesting pans out :)

The following PDF is the Draft Primer for the 2013 NOVA Open and Invitational Warhammer 40,000 Tournaments.

Viewers should expect similar primers in the coming couple weeks for Infinity, Warmachine/Hordes, Flames of War, and Fantasy.

The following extract explains in brief some of the more dramatic changes/notes from the primer, to help guide an understanding of why they are presently in there:

n 1850 Points – The NOVA will determine its final point level by the release of the final Primer and opening of ticket sales on February 1, 2013. The level here is kept high to ensure all codices can bring balanced all-comers style armies, without the game devolving too far into rock-paper-scissors (the NOVA doesn’t mind this style of play, found more frequently at smaller point levels, but does not choose to pursue it for its Open and Invitational tournaments. It is of equal merit that 1850 enables us to coincide the point values of the Open and Invitational, while leaving the well-received Narrative unique at 2000 Points and Double FOC. This level also preempts distracting internet chatter focused on arguments about the Rulebook-instituted 1999/2000 point separation between Single and Double Force Organization Charts. The NOVA’s use of 1999 for the 2012 Open was in part related to the simple fact that most of its attendees registered and built 2000 point armies long before the release of the new edition, and had very little time to make dramatic changes. Deciding on a point level for 2013 will be a more well-rounded decision-making process.
n Mysterious Objectives – We’ve played with these for some time now, and the long and short is this – mysterious objectives are not a huge deal. They can be impactful, but they are not a consistently broken or inappropriate game mechanic in actual play. This may be a different story for Archeotech Artefacts!
n Mysterious Terrain – Mysterious terrain will be out for now, simply because a) most of our terrain doesn’t fit the mysterious terrain categories, and b) we seek to put consistent terrain on each board, so all players are participating in the same missions at the same times.
n Much greater mission variety – You’ll note right off the bat, the missions presented in Primer Rounds 1-6 are very different from what you’re used to. Roll with it, offer feedback, tell us what you think. Some of them include intentionally “off” components, to help stimulate the critical thinking of you all as you playtest. The key to the NOVA “format” is the way we bracket, score, and pair players … plus presenting a consistent and fair playing field.  We want to avoid creating a format that can be too easily gamed, and felt the missions put out in 2012 – like the decision to go with 1999 points – better reflected fairness to hundreds of paid and registered players. Given more time, we want to really knock the missions out of the park for 2013. Your input here is welcome as well.

Please playtest, review, and provide feedback on the missions. The goal here is to create a more closely 6th-Edition reflective environment, while maintaining a balanced and fair mission format encouraging balanced armies and close games.

Questions welcome ... and enjoy!
Posted by Mike Brandt; mvbrandt@gmail at 9:23 AM 5 comments:

This Week in Whiskey Blogging - Draft Primer This Morning 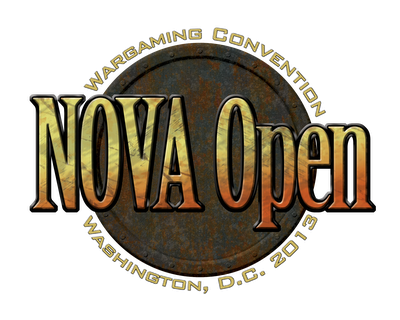 There are some substantial changes in the Draft Primer for this year's missions compared to last year's.

Explanation and invitation for input incoming.

Information about new rules, upcoming events, new programs, new activities, new seminars, etc., throughout this week. I'll also be posting a long-overdue article addressing the increasing nature of our community to brand tournament and/or home play as only being playable "one-way." (I.E. "2000 Points Double FOC = Only 40k There is! Hint: DRAFT Primer is set at 1850).
Posted by Mike Brandt; mvbrandt@gmail at 6:29 AM No comments: