I'll expound on this article when I get in today, but it can't hurt to start the inevitable conversation.

Most of the new rules for 6th are actually quite fine so far ... and a lot of the rules in 5th didn't change all that significantly.

The things as a TO crew that we'll have to rapidly assess are as follows:

1) Doubled non-ally FOC at 2,000 points (I'm quickly and rather easily leaning toward simply keeping at one bog standard FOC at 2k, instead of doing something silly like making it a 1999 point tournament)

2) Allies ... this is the biggest of the elephants in the room; how deeply does it impact balance and fair play to allow Allies per the new rulebook?

3) Flyers ... if you've read the details of the flyer rules, this one's not a big deal ... their zoom abilities are quite managed by the movement restrictions placed upon them

4) Mysterious Terrain ... since this seems to only apply to a couple of piece types, we're leaning toward disallowed, but it's something we'll have to evaluate with the actual rulebook

5) Purchased Terrain ... almost for sure NOT going to allow Fortresses of Redemption; but should we be planning to allow some of the smaller pieces? Leanings in both directions

6) Missions ... how do the new Eternal War missions blend in with tournament play, and how will we structure them within the NOVA? Remember, the key is w/l, so we're not opposed to creating a slightly different approach to missions if the rulebook forces that ... but will it, should it, etc.?

Will expand on these, and in reaction to comments, as the day or three wears on.

Opportunities for Further Input and Thoughts - 6th at the NOVA Open, + Registration Update

The question then becomes, do we stick to our contemporary plan of going with 6th edition if there's 2 or more months for players to prepare?

Right now, we're learning toward yes, but can't make a firm commitment until we get closer in.

There are more pros, and more cons. What I want now, is to hear what you the attendee and prospective attendee think. Do you really care THAT Much? I want to hear if you're AMBIVALENT also ... the ambivalent ones are an important opinion, and one that rarely shares itself (understandably).

VIP  Bags are Now for Sale, info and links at the top of the newsletter (linked on next line)
Newsletter is Now Up for June
Our Chief Appearance Judge and Amazing Artist, Geoff, has Completed his Rendition of the Native American History Museum.

FYI THERE ARE ONLY 50 VIP BAGS TOTAL SOLD THIS YEAR, AND 25 ARE ALREADY GONE! We literally opened sales a couple of hours ago, and half are sold out. Grab while you can.

You guys have seen work-in-progress shots of the NAH Museum for some time now, here's the mock-lit final (all of our monuments will be fully LED lit by the time of the event).

For those who'd like to play a more interesting theme for the DC Narrative, your boards will often have pieces just like this as central points around which combat will occur (YES, these are intentionally huge, to help create a cinematic feel ... not necessarily a balanced game board!).

I already know one Necron attendee for the Narrative is planning 3 Doom Scythes to give his army that "Independence Day" feel! 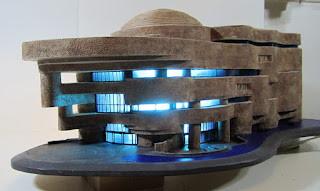 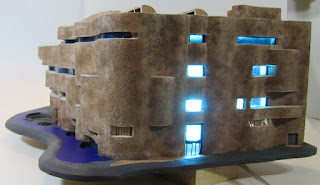 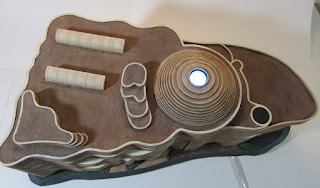 Posted by Mike Brandt; mvbrandt@gmail at 10:07 AM 7 comments: