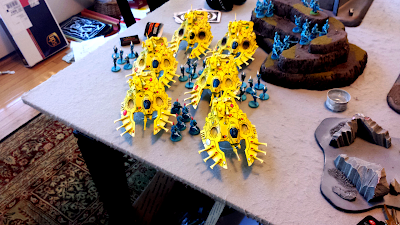 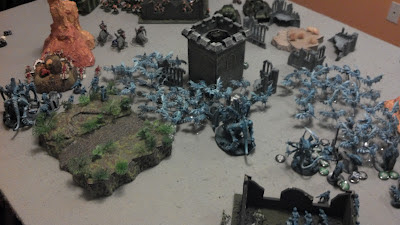 Calling all 40k players in DC. Last day to join the Fall 40k League! 6 games over 6 weeks at 2000 points. For more information and to register, jump over to the Beltway Gamers forums at http://beltway-gamers.com/forums/index.php?/topic/2823-the-great-fall-40k-league/.

I'll be joining in as one of the adjudicators of this, along with Eric Hoerger of the BWG and Chris Shriner of the IFL.
Posted by Mike Brandt; mvbrandt@gmail at 3:12 PM No comments:

I'm exhausted still! This was by FAR the best NOVA yet. I have to collect a bunch of photos, do a bunch of data mining, and a whole lot of other things to write a proper post-event, but I wanted to get ahead of a couple quick things.

1) NOVA intentionally designed a drop round after 6 if people felt like relaxing on the third day. 36 people chose to. Their opponents for the next day all received games as desired. Nobody got jipped out of games 7/8. So EVERYBODY, it's COOL! There was some initial chatter about mad drops/quits, and it's not true. Even given the option, only 36/227 chose to willingly drop. The subsequent round LOOKED like a lot of drops, but was simply reflective of players watching final games, hitting seminars, playing people they've wanted to once all were out of competition, etc. Rounds 7/8 results from said drops had no impact on final standings.

2) Torrent of Fire does not accurately display NOVA Open standings. I've seen some people starting to say things like "CSM didn't finish higher than 54th" or "The guy who finished 2nd got a bye," and there's no actual final standings published yet. You're just sorting by various metrics in torrent.

3) I've never experienced the enormous level of excitement that I experienced from attendees this year. I was absolutely touched and blown away by h ow much fun people seemed to have, and how appreciative many people were in finding me and thanking me. I hope they thanked ALL the staff just as whole heartedly. If you had a great time, also, share about it! We dig around for all the kudos, and put them together for the staff Thank You party on September 21.

4) Look for the survey, and fill it out even if you didn't have a great time! It's the way by which we best improve the event year to year.
Posted by Mike Brandt; mvbrandt@gmail at 6:35 AM 6 comments: