So I received a contact from Thomas "Goatboy" Reidy the other day informing me my site logo wasn't up to the task ... and how could I disagree (it was blurry, I did it on photoshop one random day)?!

A little texting back and forth and he was off to the races. I gotta say, I can't complain about the result! He even did the Tyranid in my own Hive Fleet's colors, with NOVA and Whiskey40K tones to match!

So a quick shout-out and thank you to Thomas (http://goatboy40k.blogspot.com/). Now if only I knew how to properly build and design this blog so everything fit perfectly together! "Goatboy" is a well-known internet blogger, tournament attendee, cheery fellow, miniature painter, carrying case painter and overall commissionable artist with a passion for our shared hobby. Check him out if you haven't! 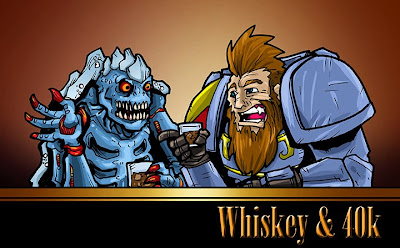 Posted by Mike Brandt; mvbrandt@gmail at 7:03 AM 3 comments:

This is possibly not true. How many people out there think Space Wolves will retain Runic Weapons that nullify psy powers (vs. just buff their own unit's Deny the Witch)?

OK, so maybe it is true.

The state of the 40k Meta is not bad right now, save 2 builds that make the game incredibly difficult to prepare for.

Long story short, these lists rely on extremely powerful units that are geared/equipped/ruled to be able to kill technically anything in cc, yet are also extraordinarily fast, separable, and possessed of some form of re-rollable 2+ saves. By far the NASTIEST of these is the Jetstar.

Jetstar lists can be run a variety of ways. In my opinion, the strongest at present was run by Matt DeFranza at the Battle for Salvation.

In general, these lists revolve around 5-6 squads of Guardian Jetbikes, a squad of Dark Eldar Warriors [to enable ...] Baron Sathonyx, 2 Wraithknights (or a set of Wave Serpents if you prefer, which I personally do not if you're doing it "right"), a pair of Farseers on Jetbikes (both with Runes of Warding/Witnessing to prevent Fortune Fails and Misfortune/Terrify/Hallucinate; one with the Shard of Anaris for Fearless), several squads of Swooping Hawks and 10 Warlocks on Jetbikes, with a few spears optionally to fill in points.

This list is custom built to 6th Edition, combining psychic powers and special rules for the ability to win almost any objective-based mission (which should be 5 of 6 Tournament Missions if you're reflecting the game's design), and to field a unit with extreme mobility and a re-rollable 2+ armor save, cover save, and re-rollable 4+ Invul Save (with optional 2+ re-rollable invul save if you want / position for it). The unit also has Hit and Run and Fearless, and it fails its Hit and Run on only a 6. It has extreme mobility (able to move 48" a turn if needed ... trailing behind to keep Baron in coherency for shorter moves ... and able to split into 4 distinct units, 3 of which can go anywhere, AFTER buffing everyone with powers like Fortune and Protect, so the splitting units are all 2+ re-rollable cover/armor when they split).

Moreover, these armies are backed by bunches of Guardian Jetbike units that score and contest effectively, and also can move 48" at any point. Coupled w/ the ability to often enough get Scrier's Gaze and keep them off the table until Turn 4, it can be hard to actually draw a bead on them (much less do so without getting pinned down or outright destroyed by the highly mobile council in your face, or the 2 Wraithknights that in the idea situation should be trailing it).

The catch here is that even now, a properly designed Tyranid list trumps BOTH these armies rather dramatically, due to the mobility and model count of units like Gargoyles, coupled w/ Shadow in the Warp on a hide-able model like the Parasite of Mortrex. Being able to jam a 12" aura of "take your key LD tests on a 3d6" down the throat of an army built around a relative paucity of firepower and the presence of a big honking 2+ re-roll unit dependent on psychic powers to function is a pretty effective way to take them down.

Moreover, Tyranid lists have the bodycount in throwaway or "it's ok if they aren't doing anything" troop units like Termagants to properly bubble wrap objectives against late game contests / controls from units like the council and guardian jetbikes. They also possess key abilities like mass poison, to make the prospect of Wraithknights getting tangled into big 30-model gargoyle and/or termagant squads not all that terrifying (in fact, Parasite outright loves a chance to fling rending instant-killing attacks at Wraithknights).

That all said, Tyranid are neither overly popular nor overly present in contemporary 40k, and the "right" list with the current Codex takes far too long to play (making it painful physically in a tournament setting, and also downright unsporting for your opponent).

We're also about to get a new Tyranid codex.

So what should we all be hoping?
a) The new Tyranid have optimal lists that can be played reasonably in a tournament setting without utterly destroying either your back or your opponents' patience.
b) The new Tyranid are good enough to be taken by a fairly large # of players, thus forcing Jet/Screamerstar players to face the concept they are fairly likely to run into them during a typical GT.
AND BY FAR MOST IMPORTANTLY:
c) The new Tyranid retain Shadows in the Warp or see it buffed, in its ability to apply psy power dampening or nullifying auras to portions of the table. If Shadows in the Warp sees a nerf the likes of which Runes of Warding suffered, and simply applies something like Adamantium Will to units in range, the game of 40k will in my opinion be broken, and will require a basic rule tweak added to the tournament environment akin to:
"Any re-rolled save only succeeds on a 4+."

PS - Jetstars can be played around, can be meta'ed for (at risk to getting pantsed by everything else), can be beaten. In the hands of decent players, however, and as the proper jet council "net list" becomes more and more well known and played (it's also SUPER AFFORDABLE TO BUILD FINANCIALLY), it's going to become a serious problem at the average tournament, for the average player. TOs always have these folks in mind first and foremost. We care LESS about the person who is a 40k Savant and thinks he can handle any combo any time. I'm sure you can. You're not the majority of people attending events and having to deal with things like a unit that can contest the entire board at any time, and passes 35/36 saves.
Posted by Mike Brandt; mvbrandt@gmail at 2:12 PM 29 comments:

The DC Narrative Team is in playtest mode for the next couple months working through a sort of optional comp.

Players who participate in either the full on or night-only components of the Narrative will be able to "activate" Narrative-sync'ed versions of their Codices. These are only optional - people who want to play with their basic dex are more than welcome to do so.

As a reminder, the Narrative enables all components (more or less) of the 40k Universe, including FW armies, 40k-approved-units, Horus Heresy lists, etc. Pairing and advancement structures people toward similar power levels and list types, so it manages out the possible imbalances fairly effectively.

The goal with these changes, the first of which we'll sneak peak, is less to try and make the game somehow perfectly balanced, and more to engage a limited and manageable number of optional tweaks that enable people to play alternate or popular/desirable aspects of their codex in a less-hamstrung way. Example: more effective Deathwing/Ravenwing/Dark Angels ... or non-Serpent-Spamming/Jetcouncil'ing Eldar.

Thus, first two "past the first playtest and into v2 of expected several more" test tweaks; feedback is welcome, but keep in mind tweaks are meant to be limited (And thus easy for attendees to process/anticipate) and fairly broad in their impact; you'll also notice things that are meant to somewhat prevent "more broken" builds (i.e., the 0-2 limit on Avengers in the Wraith aspect Eldar option):


Aspect of Piracy (those Virtue who have adopted realistic acceptance of what has happened, and taken on an “every superhuman alien immortal for himself” outlook … to also include mercenarial / allied races better equipped to handle the outcome of the 2nd war)


Aspect of Insanity (those Virtue who have been so horrifically scarred by what they’ve witnessed that they are incapable of coping beyond falling to the worst antithesis of their race … murderous, horrific and utterly insane)


Aspect of the Van (Generally oriented around speed and aggression, the various recon, advance and vanguard components of Humanity’s forces)


Aspect of Experience (Hardened veterans who’ve kept their cool over time, and are intimately familiar with how best to engage the various forces of the Virtue still active in the Solar System)

Humanity - Aspect of the Van
- All Wraith Constructs gain the Jetpack unit type; Wraith Knights remain as Jump
- The Hemlock gains Holo Fields and AV12, and costs 120 points base
- Dire Avengers gain “0-2” in terms of the # of units that may be selected

Dark Angels v2
All Dark Angels
- All Dark Angel “Infantry” or “Jump Infantry” models in Power Armor gain the “Relentless” USR
- Any Dark Angel model that does not move in the Movement Phase gains Twin-Linked on all of its ranged weapons until the start of its next Movement Phase
- Blacksword Missiles are resolved at S8 against enemy models with the Skimmer, Flyer and Flying Monstrous Creature special rules

Virtue - Aspect of Implacability
- All Terminator Armored Models without the “Independent Character” special rule are Scoring
- All “Deathwing” Terminator, Knight and Land Raider Models may select any options from their Unit Entries at no points cost