From http://fundaemons.blogspot.com/2013/02/more-rules.html
Translation: Giant high model count glass hammer. With 5++ invuls on even Lords of Change, and certainly on things like the KoS and others, you're for the most part looking at a dex full of ridiculously hard hitting, but exceptionally fragile models. Should be fun.

Rules after the break ...

Read more »
Posted by Mike Brandt; mvbrandt@gmail at 8:32 AM 1 comment:

Translating Some Daemons Rules for the Impatient

New Daemons rules are being posted up by a guy on a German forum who has access to them early via his IPad or whatnot.

Eternal Warrior is largely gone
This will make Daemons players upset in weird ways (WHAT, THEY ARE DAEMONS!?!) but actually makes a ton of sense fluff-wise. Daemons are eternal in the warp ... on the material plane they are bound to existence by the physical form they are occupying or holding onto through sheer power ... devastating damage to their corporal hosts makes it very difficult for them to remain on the material plane. Hence, destruction from things like Instant Death would actually be MORE devastating to Daemons, b/c as soon as it hits them they're going to largely vanish back into the ether, leaving nothing or a completely different looking corpse-host behind.

Skulltaker, btw, seems to still be eternal. All the other dudes, including Greater Daemons, are not. This makes them a bit Enfeeble / rad grenade bait under certain situations, but isn't a HUGE dealbreaker otherwise. If Kairos is T5 still, this is worst for him ... b/c he can suddenly be a grounding test away from game over if he takes an Enfeeble or similar effect.

You roll this in the shooting phase, apparently. The snake eyes isn't as bad as people feared. Still kinda sucks. On the flipside, boxcars means you get a potentially very expensive scoring unit of choice added to your army. Kinda cray cray.

Instability seems to be fearless to shooting based morale checks, but not in CC. In CC, you take extra wounds for each # you fail your LD test by. That said, boxcars poofs the entire unit, and snake eyes regenerates all the damage you suffered in that combat (so, yes, you could whittle a screamer unit down to a single wounded model w/ a nice charge, and if they snake eyes their Instability test, see them all come back to life as if the combat never happened to them).

Kairos apparently has only a 4++, and I heard somewhere that his re-roll only applies to invul saves now. His powers also seem a little whack / difficult to use properly / oriented around his two heads. It would be GW-ish to see him get nerfed, since so many Daemons players use him. Additionally, looks like plaguebearers got the worst of it with the nerf bat ... getting cheaper, but also dropping to T4 and losing FNP (though there are ways to give it back apparently).

Daemon Princes are indeed HQ, but taking a standard or named Greater Daemon of their mark lets you take them as Heavy Support anyway. They seem to have largely gotten more expensive, especially if you want wings.

Lots can be mined from there if you have the time to sift through the wall o' chrome-translated text. Page 41 of the thread. Phoron is the poster.

These are still in the works, but rest assured they're coming ... will likely be evening events Fri/Sat, with limited attendance, hosted in the Presidential Suite. Little bit of love to Dan from Tectonic Craft Studios for the idea, and for his likely support/sponsorship of the Beer Seminar. Whiskey & 40k will be bringing you the Cocktail Seminar.

Anticipate a couple of hours, with the first spent on education, and the second spent on putting your education to work while socializing with fellow gamers. These'll be classed up a little, and not drink-all-you-want bingefests.
Posted by Mike Brandt; mvbrandt@gmail at 8:51 AM 5 comments:

Death from the Skies Clarification

The NOVA will not go about violating any copyright laws, or even really infringing on anything. The point will not be to replicate or paraphrase the rules in some kind of sneaky way, but simply to create a situation where at our Independent tournament not requiring players to own a direct order booklet containing only a couple of pages of rules in order to use rules that are officially updated in GW FAQ and digital mediums.

Just b/c a couple of people are concerned we might get sued ... we won't :) ... and we aren't doing anything aimed at sticking it to the man or sneakily providing the community free rules. The point simply is, in example - if you want to use Stormtalons at their updated points, you're not going to have to own an iPad or Death from the Skies for us to allow you to at NOVA 13.
Posted by Mike Brandt; mvbrandt@gmail at 6:18 AM 1 comment:

So, Games Workshop released its Death from the Skies booklet, changing rules for several common and popular fliers in the game of 40k, adding them to codices, and only selling it direct order ... plus, selling it.

The NOVA will be handling this by incorporating the new rules changes into the NOVA FAQ. You will not need to own a copy of Death from the Skies or an IPAD in order to use the new rules. Because that would just be terribly inconsiderate toward a customer base.

The NOVA FAQ gets printed and put in everyone's full-color guidebook, so you'll have the updated rules with you whether you want to or not! 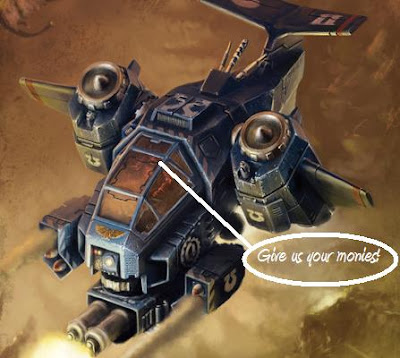 Posted by Mike Brandt; mvbrandt@gmail at 5:04 AM 13 comments:

Looking for: Excellent Miniature Artists, for a Cause

The NOVA Open Charitable Foundation is acting as one of several sponsors of an up and coming project that the project-leaders themselves will share a lot more on soon. We're helping, along with several others, to coordinate the project.

Long and short, anyone who reads the blog and is pretty handy with painting a miniature ... if you'd be willing to take on literally 1-5 miniatures to paint over the next several months, toward a very good cause, drop an e-mail to mvbrandt@gmail.com

We have most of the miniatures covered by a fairly elite group of artists. But, there are a few odds and ends left, including some cooler figs, and we could use a hand.

The focus is on putting your heart into a small handful of miniatures, so there'll be no massive projects dropping on you here - more a very focused effort.
Posted by Mike Brandt; mvbrandt@gmail at 1:52 PM 4 comments:

Registration had a couple of hiccups where you initially couldn't checkout as a guest, and it was hard to find the weekend badges. These are now corrected.

The newsletter has a METRIC TON of information, and every event primer.


As warned, VIP bags are selling very quickly ... snag them while you can; buying one a single time carries a lifetime annual KR discount (see newsletters for detail) along with it, after all!
Posted by Mike Brandt; mvbrandt@gmail at 7:14 AM 3 comments: