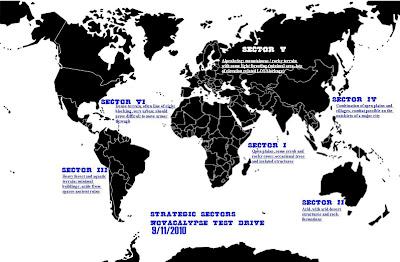 Ok, so the NOVACALYPSE Test Drive is Saturday, with JWolf and Matthias (WarGames Con and Adepticon) respectively piloting each "Faction" Remotely. Keep in mind this is a draft situation, we're doing this on a fun casual day with our friends and buddies, hence the lack of polish to this stuff - but I want to keep everyone informed on all the myriad things we're doing getting ready for the full on NOVA Open Convention next year.

Here's the briefer on what the team missions will be for Saturday's draft/test drive. Remember from reading earlier that this is basically a series of Team Games 1500 points each 2v2 with some extraneous events thrown in, unusual terrain concentrations, and unique / fun missions.

The missions are in most cases divided between the two team members, so the tactics and strategy involved revolves around team mates helping their buddies accomplish goals they can't directly participate in.

Feedback on these is welcome - not all will be successful or pursued for the final event, that's why we test drive. Do keep in mind that they aren't supposed to have *quite* the competitive bent that a standard 1v1 tourney would have.

To start things off, Matthias and JWolf will assign each of their teams to Sectors I, II and III of the Strategic Map above privately. They'll also assign their 2 NOVAcalyptic Tokens to two of the three sectors. The NOVAcalyptic Tokens do the following:

Supreme Commander's Oversight - The Commander's Team in the Sector assigned this token may roll 6 dice at the beginning of the first player turn, three per team member; whatever the results of these rolls, save them and put them to the side. At any point in the game, a team member may replace one of his OWN rolls with one of the three rolls he made to start the game. So, for example, if a player were to roll two 5's and a 6 with his three pre-game rolls granted by this token, he could substitute them for rolls to hit, saving throws, vehicle damage rolls, run rolls, leadership rolls, whatever. Once used, these rolls are gone for good.

Vital Mission Assignment - The Commander's Team in the Sector assigned this token may re-roll ANY failed morale or pinning test taken for the duration of the game.

Once the teams and tokens have been assigned to either Sectors I, II or III for Round 1, here's how each Sector will work mission wise; for the actual event, we'll have it polished down to the best handful of missions, which will obviously be repeated across many of the boards ... we have nigh on 12 different missions in playtest for Saturday, as a good first dusting of a few ideas ...

Sector III - South America Analog; "Planetary Water Supply" ... Poison or Protect key aquatic resources; control a major bridge
Terrain expected: Heavy foliage, heavy swamp and aquatic terrain, a major river with a bridge, a pumping station
Missions
A Precious Resource - Nominate one of your team's two 1500 point forces as capable of controlling Water Supply Points (objectives situated in water terrain that each score 1 point if held at the end of turns 2, 4 and 6)
Bridgehead - Nominate the other of your team's two 1500 point forces as capable of capturing a critical Bridge (there will be one bunker at either end of the bridge, and an objective in the center ... whichever side controls 2 of 3 points on the Bridge controls it at the end of the game)

After these are complete, we'll break for barbecue, cigars, more whiskey, etc. :)
I'll be in touch e-mail wise with Matthias and JWolf and they'll send in their next team assignments and assign their next tokens. We may fiddle with some narrative stuff and map advancement; we're keeping it simple for the moment - no major impacts who won or lost the first round, but winning or losing it will be based on net missions accomplished by the entire Faction

On to Sectors IV, V and VI, which become much more complicated

Sector V - Europe/Alpine Analog; "Kings of the Hills" ... Capturing the Eagle's Nest and the Alpine Mountain Range
Terrain Expected: A LOT of hills, a ring of bunkers at the center
Missions
Claimed In the Honor Of
- Any non-vehicle unit reaching within 4" of a centerpoint of a hill (each hill will have a centerpoint marked) MAY "plant the flag" at the end of its movement phase ... only 2 flags per 1500 point force may be placed at any given time; no flags may be placed until TURN 2
- At the end of any flag-planted unit's PLAYER TURN, check to see if it is still completely (not majority) on the hill it planted the flag on; if it is, award its controlling Team with 1 point
- If at any point in time a unit with a flag planted is DESTROYED, the opposing Team is awarded a number of points equal to the TOTAL the flag planting unit had earned MINUS 1, to a minimum of 1 (in example, if a unit plants the flag it immediately will score 1 point at the bottom of that player turn; if it is subsequently destroyed in the following enemy player turn the opposing team will earn 1 point back ... 1 minus 1 to a minimum of 1, effectively nullifying the score; if, on the other hand, the unit planting the flag survives and remains on the hill for 2+ turns, it's a net positive gain for the flag planters even if the unit is eventually destroyed; in short, planting the flag with a unit in peril of being subsequently destroyed is wasteful, planting the flag and surviving more than a turn on the hill gains you something)
The Eagle's Nest
- The ring of bunkers at the center of the board surrounds an objective; ALL team forces may capture it with Troop units like any other standard 40k objective; contested the same as well

- These models deploy separately from the rest of their unit, and MUST Infiltrate via Outflanking or standard Infiltrate deployment
- Their mission is to either join any enemy unit by ending their move within 2" of an enemy model, or by assaulting the unit and surviving a round of combat
- If successful, their team earns 3 points if accomplished by the end of Turn 2, or 2 points if accomplished by the end of Turn 4, or 1 point if accomplished by the end of Turn 6
- As soon as they join the unit, they immediately come under the control of the ENEMY player whose unit they joined; at this point, if the model is KILLED, the points are refunded at the same rate and turn total (i.e. 3 by Turn 2, 2 by Turn 4, 1 by Turn 6) (the goal here is a tough call on both teams' parts regarding committing their own units to death in order to earn points back, joining enemy units with dangerous characters too soon and having them harm their own team in return, etc.)

Meatgrinder - The other 1500 point force is scoreable for purposes of VICTORY POINTS; any Troop units killed will immediately return to the board from their controlling player's long table edge at the beginning of their next player turn, but will not return with any dedicated transports or upgrade characters, etc.; if they are killed again, they are worth double victory points; if they are killed a third time, quadruple victory points, and so on and so forth (doubling every time)

Have at it, and keep posted for photos/updates/feedback/improvements/etc. going forward.

Our plan is for some VERY special guests (think possibly published sci-fi authors of relevance ...) that we've been in talks with to write the lead-up to the actual NOVAcalypse and to be the Overall Commanders, with as many as 50 teams of 2 participating, and a lot of development going on. We'll also probably have a "club" competition going on throughout the weekend, to determine which clubs can perform the best over the weekend, and the NOVAcalypse event will certainly be an integral piece of that scoring, with entire clubs having teams battling over various sectors of the overall field.

Yatta yatta blah blah, further feedback welcome; also, feel free to try these missions out for fun and let me know how they go with your buddies.

Posted by Mike Brandt; mvbrandt@gmail at 7:24 AM