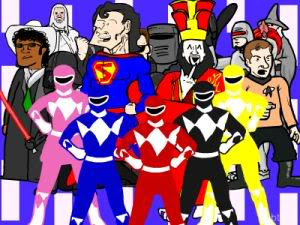 OK, brass tacks, as I've talked about this for a bit now.


I don't believe in national championships, superlatives, etc. in this hobby of ours. It's too heterogeneous on multiple levels, from list building to local skill ranges to mission formats by tournament to scoring by tournament, etc.

As such, you can't have a national championship that actually means anything. What you can do, however, is host a high quality, neutral site Invitational for the best performers from some of the bigger and/or better events country (and eventually world) wide, to at least give people a taste of some great players all going at it within a format that ensures all games are tough and well measured.

So what are a few things you can count on for the Invitational in terms of format, before I get to the "how do I attend?" and "what does it mean" and "why are you doing this" etc.

1) Well-versed and well-rehearsed referees at every table. Refereeing 40k is an important thing to get "right" if you're going to do it, but it accomplishes a few things that are very important ...
2) Relatively basic missions ... though we will probably use the "no ties" and tiered format of the NOVA, the missions/goals themselves will probably more closely match the rulebook, and that's a big deal. People attending an Invitational will be doing so because of their performance at a wide variety and scope of tournament setting. Though some invites will be handed out to NOVA style tournaments, it's unrealistic and unfair to invite people to compete against other bests from other events, and favor the event too heavily toward one "style." Everyone is familiar with the book missions, plays them regularly, etc., and so we will likely be truer to that.

3) Prizes. Our plan is cash prizes at this point, BIG cash prizes. Some people object to this as bringing out the "worst" in competitors, but here's the reason that isn't actually going to be as big a deal (and trust me a little - everyone complained sportsmanship would be a big deal at the Open when we divorced it completely from competitive score and ... it was one of the least dramatic tournaments I've seen, and others had seen by their testimony) ...
4) Timing - At present, we're planning on 4 rounds Friday, final round after the NOVA Open GT Finals on Sunday. Everyone plays in the Open GT Finals this time around; we coined this notion actually before the Open this year, just didn't have the space available within our budget to execute it.

So, how do I get invited to the Invitational?
Well, there are two options here

Option 1
- Perform well enough in the singles 40k events at ...
Option 2
- Find a way to legitimately earn an at-large invitation; I will hand out a few of these, based upon a wide number of factors (including but not limited to: reputation, noteworthy success across numerous events, rankingshq, etc.)


Next up, What does it mean?

Well, formally speaking, nothing. If all goes as planned, you will get to claim some bragging rights against a pretty talented field if you do well, and you'll win some really nice swag. We're not trying to claim "competitive national championship" status here; it's simply an invitational 5-round, 32-player tournament occurring during the NOVA Open 2011 Convention Weekend. The prizes and competition are your reason to come ... not any kind of claim of "bestest field of competitors evar!!!!111"

Finally, Why are you doing this?

This component is about bringing the tournament scene closer together, about giving cred to tournaments that put on a really great show and giving them a way to sorta prove that, about giving tournament organizers a little bit of bragging right shots when the people THEY send to the Invitational win it :) ... in short, again, about bringing us all a little closer together, and about adding a little pomp, pizazz and spectator-pleasing fanfare to our tournament scene. Every convention has its own unique flair and themes, and one of ours is getting some of the big name heavy hitters from around the 40k world together to duke it out; we got this rolling with our Whiskey Challenges last year, and getting it going again more with an Invitational is another way to go about it. I want all the tough top players out there to have a few ways to go about at least trying to really prove it, and the more we get all the tournaments buzzing together, sending players back and forth, and having little events where bragging rights can be gained helps get this all rolling even more. Besides, one of the claims everybody always has about any tournament is that regardless of the missions and scoring and format and yatta yatta, the winner(s) clubbed baby seals along the way. Here's a shot for anyone who comes to know right from the get go, not a single easy fight'll even luck its way into their path.

Well, or so we hope.
Posted by Mike Brandt; mvbrandt@gmail at 8:07 AM