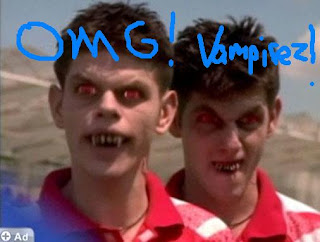 OK, so after some internal playtesting of the Angels dex and a few basic builds, I've got a little more to offer in terms of feedback.

Before anything, I want to say that I strongly protest GW contributing to the rising theme of VAMPIRES across all levels of geek and pop culture these days. To be fair, at least theirs do not glitter or wear cool sunglasses while swinging silver swords. I don't even want to start on any of that crap or how awful it is. They also don't wear gay rings that let them walk around in daylight. They also don't ... well, whatever.

These are prissy, image-obsessed, perfection-obsessed, golden-haired space vampires. So image-obsessed are these guys that one of their BEST CAPTAINS, named Tycho, even turned into a raging batshit insane lunatic when his face was disfigured. To quote him, "OH MY FACE?!?! RAWRAWRAWRAWRAWRAWR." Said it just like that. Their redeeming virtue is that they will tear your goddamned face off.


First off for this post, my first few all stars of the dex ...

1) Basic Predator w/ Autocannon + Lascannon Sponsons
- This unit cracks in at only 10 points more than its Space Marine counterpart, but solves every single problem with said unit. By simply being able to move 6" and fire all its weapons, it's an incredibly potent gun platform that is synergistic with the Blood Angels dex in general. Here's why ...
- The Blood Angels have the capacity to put down numerous (4-5+) fast transports full of angry melta and close combat capable vampires from space. Since they move 18" on turn 1, they are an extremely high priority AV11 target, which means extremely appetizing and almost necessary for enemy autocannons, lascannons, and missile launchers (plus equivs) to shoot at. Not shooting at them enables them to move 18" and pop smoke ... or if the opponent is going second, they've already moved 18" and popped smoke ... "omg" time.
- The Blood Angels have access to, for an affordable 345 points, a trio of fast moving, scouting AV13 (but AV11 side) twin-linked assault cannons. Often times, a canny BA player will scout them way forward, presenting AV11 side armor almost on purpose, in order to challenge opponent target priority even further ... i.e., do I shoot those fast moving AV11 transports full of angry vampires, or do I take the opportunity shot at AV11 side on a fast moving twin-linked assault cannon? The correct choice is the transports, still, but some people get "googly eyes" when they have a chance to get AV11 shots at an AV13 vehicle, and will "bite" the opportunity.
- The above two combinations mean that in a well crafted list against most opponents, your 48" range but can still move Predators are going to be firing most of or all game unmolested. If your opponent does shoot at them, it's a win, b/c they're shooting at AV13 instead of 11, and you're probably covered up at least from a lot of fire angles. More importantly, you're mobile and supporting the advance, there up forward to tank shock late as needed, and safer from outflanking threats or other things that normally "deal" later in the game with stationary predators that can't move if they want to be of any value. This one little hiccup is why people tend to take AC/HB preds instead, so that they don't feel their points are wasted if they have to move. Problem solved.
- You have to remember, why these three bad boys are good is that they will never be in range of assault cannons, meltaguns, and the like, unless you want them to be, and they will be firing most turns due to the challenges the rest of the army combined w/ them presents in terms of target priority. Again, if they get shot at instead, you're winning.
- These guys are tailor built to tackle AV12 and AV11 and AV10 transports ... all of their weapons are effective against these armor ratings. This means that having a trio of them custom builds you to tackle the king shit armies on the competitive pole right now - meched up transport-heavy guard and meq lists.

2) Baal Predators
- These guys are going to die often, and miss often, and you shouldn't mind that. They are extremely in your face threats that will unnerve opponents and give you unique advantages against numerous foes. Take, for example, gunline Tau with kroot bubblewrap. If you are going first, you can tank shock their kroot bubblewrap with its LD7 three times on turn 1, and immediately side armor assault cannon their transports or hammerheads or piranhas while inside of disruption pod range.
- When you aren't going first, in a good list, it will sometimes behoove you to race them forward and present AV11 side armor opportunities for your opponents (preferably ones where you still have cover anyway). See points about this in the Predators entry above.

3) Most other BA vehicles, esp. all Rhino chassis base
- Vindicators, Rhinos, Razorbacks ... they are all Fast now. While you pay a premium, this is something to take advantage of. Reach out and touch somebody with a demolisher cannon from 36" away, find the task of getting side armor shots with razorback weaponry a piece of cake, turn razorbacks into miniature Immolators for cheaper, etc. Let's look at some range numbers as well ... if you have a 12" deployment "pitched battle," for transports, you get a second turn charge range measuring from your table edge for the guys inside that reaches 45" across the table. Your 6" melta range is 51" from your table edge by turn 2.

4) Sanguinary Priests
- 6" Aura of Feel No Pain and Furious Charge on an Independent Character who only costs 50 points
- 3 of them per Force Slot
- Ability to still have 2 meltaguns in a 9 man assault squad (via infernus pistol) allows you to safely take 9, put them in a rhino, and attach a sang priest to keep that aura safe
- Combine the above information and utilize for silliness involved with an army that is all FNP and FC all the time
- Ponder the meaning of S9 TH/SS termies with 2+/3++/4+FNP

5) Blood Talon Heavy Flamer Furiosos
- Lots of power weapon attacks on the charge (for a dread) pre-empted by a heavy flamer and/or a meltagun all going at S7 often (furious charge aura!), re-rolling to wound, and generating new attacks off every successful wound, attacks that themselves can generate new attacks

It's hard not to build a lot of lists that comprise of lots of assault squads in razorbacks or rhinos (depending on squad size / personal preference) backed up by sanguinary priest action, coupled with 6 predators or at least predator chassis. This is ok - these lists are really good. If your list contains 3 AC/2xLC preds and 3 TLAC no-sponson Baals, you're off to a pretty good start for most regions and opponents.