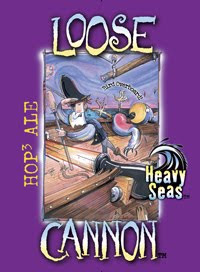 I'm not a big fan of IPAs typically, but this one takes the cake in terms of crisp, refreshing flavor that improves dramatically as it approaches room temperature.

Loose Cannon is one of Clipper City's best if you can ever find it on cask.

I am generally using this to recommend Clipper City in general. It's one of the better breweries in the region bar none, and kicks the living poo out of Dogfish Head (in my opinion), which is the region's more well-known rising microbrewery.

Named after Baltimore (where the brewery is located), Clipper City puts out a ton of great beers, but its stand-outs are from the Heavy Seas line, and include "Small Craft Warning," an Imperial IPA/Pilsner that they label an "Uber Pils" and that's one of my favorite brews on tap (typically I get it from Hard Times Cafe in Springfield, VA, where it's always on tap).

I'll be trekking out to Churchkey in DC again on Saturday, this period's amazing brewlist located here: http://www.churchkeydc.com/documents/CK_DRAFT_FRI_02_26_2010.pdf