Dealing With Deffrollas - Why Internet Freakout is Bad for You 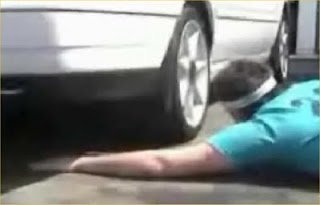 THIS is a Rant, kind of.

Premise - Recently, GW ruled in the Ork FAQ that yes indeed, it is true that a Ram is a special type of tank shock, and therefore the Deffrolla's d6 S10 hits affect vehicles that it rams. This does not come as a surprise to many people, but the folks over at Adepticon are certainly scrambling to amend that INAT FAQ of theirs ... again ...

Here's a link to the FAQ ... http://www.games-workshop.com/MEDIA_CustomProductCatalog/m970066a_FAQ_Orks_Feb2010

In a long list of articles by BOLS freaking out about the FAQ change, here's the latest, by JWolf. I don't know him personally, I'm sure he's a nice guy; I'm sure he's a decent 40k player; his buddies there over at BOLS have actually stated that they believe he is the "BEST" 40k player in the world. Not making that up. These types of superlative should never be used for a nonprofessionalized tabletop simple strategy game. They especially shouldn't be publicly stated on a well-read blog/forum.

His post is another reason why. I'm going to try to "help him out" regarding some of the points I think either are being missed or are simply too obvious.

First off, I've *always* played Battlewagon Deffrollas as affecting vehicles, and one of my closest friends plays a deffrolla-containing army. I've been dealing with them since the codex came out, and they aren't that big a deal.

The most important thing you need to do is understand the RULES of a Ram and a Tank Shock.
If you ram a vehicle of yours up against his battlewagon harmlessly (say, an empty rhino), can he ram through it? If you've got units all around his battlewagon, can he pivot or does he have to ram in a straight line? Understand the rules of a tank shock, and you can foul up his rams later in the game when he actually gets to you.

Tau Points - Well, this is pretty duh. Tau never struggled w/ killing Battlewagons, nor should they have. It's what they do. One thing you should NOT do against Orks with Tau is rely on KROOT BUBBLE WRAP. Good Ork players will have a ridiculous plethora of throwaway vehicles like Trukks, and you won't be able to shoot all of them, and they will merrily dump their boyz off early to avoid them getting blown up and de prioritize the trukks, and then will repeatedly ram through your kroot bubble's low LD until it breaks and runs off the table. Kroot bubbles are crap against solid ork players ... don't rely on them. If the ork player is dumping his boyz INTO your kroot, he's an r-tard, so you're good.

Necrons - JWolf wrote: Necrons – Remember that Monoliths get a 3+ dodge on the Ram. No Ram, no Deff Rolla attacks. Not much else to do; your guns suck for killing AV 14, and even AV 12 is crazy for anything except Heavy Destroyers. So get out of the way. Have fun looking for glance kills (same as it ever was).

OK, problems here abound. First off, in the post later on he comments that Destroyers are good. They're not that great. Necrons were my first army, and an army I've played against literally hundreds of times. I will never understand the internet's love of destroyer spam. Glancing a battlewagon to death is a nice idea but they're going to have a KFF, and it's not *that* reliable a tactic. They are open topped, so at least it's functional as a concept, but seriously --->

What's being completely missed is that treble monolith lists are probably the "most" competitive Necron build now, backed up by warscythe res invul lords. Monoliths are EXTREMELY LETHAL TO VEHICLES, and thereafter are extremely lethal to large groups of units - especially infantry - and that's exactly what Orks are once disembarked. More importantly and to the point, the Monolith has a BS4 S9 AP1 Ordnance large blast. This is arguably one of the best anti-tank weapons in the game. Everyone always fuggin' forgets this.

Monolith days get ruined by .. for example ... Tau railgun spam, but you don't start your Monoliths on the table for them to do that to you ... you deep strike on top of them and S9AP1 their hammerheads or broadside squads, or you triple 3d6 gauss their whole army, depending on how they are deployed. Then you cross your fingers on the remaining railguns' 1/6 chance to kill you when it hits ;) ... and then use your "I always get to shoot" gun again on things.

Deploy your Monoliths, utilize the 24" range to get 2-3 shots off at each battlewagon with each of them, and reserve your warriors / lords / scarabs (which is what you'll probably have). Your reserves get to walk onto the board edge near the most successful / "safe" of your monoliths, which should be just close enough together that once the ork horde gets there and starts disembarking to go after your Warriors, you're doing your best to block off such charges and preemptively disembark them, and then applying 3d6 S5 gauss (so 6 glancing) hits to everything nearby.

Necrons are not as bad as a lot of people think, and they certainly can handle Deffrollas better than "glance them to death." Deffrollas move 13" at most. This means that if you are in range at the limit of your Monolith's range, you can shoot them 3 times before they can get to you, in a "theorycraft" bubble. 24" shot, battlewagon moves 13" (red paint), back up 6" and you're 15 away from it, shoot it again, it moves 13", shoot it again, etc. Your weapon - presuming a hit, which actually isn't that hard against a Battlewagon, pull out a template and give it a few goes and see what I mean - rolls 2 dice and picks the highest for penetration, and is AP1. That means if you get a pen through, it stops the wagon on a 2+ (open topped+1 and AP1 = 2 becomes an immobilization). A glance stops the wagon on a 4. Outside of the theorycraft bubble, if each monolith doesn't get 2 shots at a battlewagon if absolutely necessary, you're doing something wrong.

Chaos Daemons - Chaos Daemons get murdered by Orks (and most other armies), unless your opponent is awful, so spending a lot of time talking about this one is a little unnecessary. You'll be running Fateweaver, so you really don't have to worry about the deffrolla actually hurting anything, and in fact if you're a demons player and have been up against Deffrollas before ... they're basically the same as ever! What you don't want to do is what JWolf says - stick your Soulgrinders in a spot that lets the BW actually do to them what it previously didn't (if you actually played that they didn't affect vehicles). The solution to dealing with something that can now only hurt "more" one single unit is to feed it that one single unit? Why are you even bothering taking soulgrinders when they are the one model that doesn't benefit from Fateweaver? Soulgrinders are AWFUL, especially in the world of meltaspam. Stop taking them, and if you are taking them, don't feed them to battlewagons for the love of mary.

Chaos Space Marines - You're not going to have too many vehicles that you really care about in a CSM army, and you are going to have lots of plague marine squads with meltaguns. Plague marines don't really care about deffrolla hits - honestly - with 3+ armor saves and only d6 hits coming in, but you can probably sacrifice one to get a meltagun off on it when it comes through a squad. If you're not splitting PMs down into numerous 5-man squads w/ proper equipment I don't know what you're doing. This is where you use rhinos to "stop" the battlewagons from ramming anywhere that they want to, and to foul up the Ork advance.

The comment about lucky lascannon shots is pretty insulting. You should anticipate that you need VOLUME heavy fire delivered reliably to Deffrollas, b/c a smart ork player has them in 4+ permacover. Low ROF = bad. Proper CSM armies (though they aren't many) don't struggle w/ Bwags, and you certainly shouldn't suicide a term squad if they only have one BW ... you can deal w/ it at range and use the combi-melta termies later on to try and manage ... oh I don't know ... Kanz, which are the real menace of ork armies. The battlewagon's deffrolla isn't what's going to ruin your day. It's 5 empty ram trukks, 5 running squads of boyz w/ klaws, 9 rokkit buggies, and 9 kanz (with grotzookas mostly), all w/ 4+ cover and running at you.

An interruptive note - if your army isn't optimized for dealing with AV12, you're not ready for the current game with Imperial Guard being so potent. If you can't move a unit 3" to get a side armor shot on the "way too long a rectangle" Battlewagon with its AV12 side armor, you're doing something wrong. As a result, if your army is properly built to deal with AV12, you can deal with Battlewagons with any list with no real issue.

Re: Marines, Jwolf wrote ...
Space Marines – Drop Pods with Meltas and Dreadnoughts are fairly sexy against Battlewagons. Drop them behind the Battlewagon wall, and hope that the Orks are dumb enough to reverse course and Deff Rolla you, wasting 2 turns. Rhinos with Combat Squads in them are great offerings to the Deff Rolla, too. If the Orks will get out and kill 5 Marines, you can countercharge and wipe them out. If they won’t Krak grenades can kill Battlewagons. For all Marines: As I demonstrated so obviously in my battle report with Goatboy, don’t drive Land Raiders up to get a Deff Rolla treatment; it’s a bad choice. But moving your Landraider to 13-14” away from the Battlewagons on a flank is a wonderful thing. Now you are close enough to invite an assault on your Landraider, which is exactly what you want. Get those Boyz and Nobz out of their shiny rides and rip them in half. This has the added benefit of allowing you to dump some attacks into the Battlewagon, so that you won’t kill all the Boyz on your turn and can finish them off in your opponent’s assault phase.

Drop Pods w/ Meltas and Dreadnaughts? A) You have to not scatter off the board, b/c it will be a tiny spot there to deep strike BEHIND them w/ the rest of the ork army there, unless it's a terribad ork army. B) You have a 2/3 chance to hit, followed by a 35/36 chance to pen, with a 4+ cover save, and then that 5/6 to stop it. 27% is not terrible, but don't pretend it's fantastic ... it's not, and this also presumes the ork is simply going to give it to you (b/c it's not like he doesn't see it coming). C) The Ork doesn't need to turn his deffrolla around to kill your Dreadnaught, and he's certainly not going to. He could practically leave you in the dust, but he probably won't ... he'll kill or neuter you with rokkits, or use any number of other things to hammer your minimum 140 point investment down and laugh at you. If you kill the bwag, great, that's cool and all, but 9 times out of 10 it's just throwing away units you could use at the point of eventual ork attack.


The Land Raider commentary is insulting to Ork players everywhere. Convince him to tank shock short, and then get out to commit seppuku with hope of hitting on 6's and penning on 6's w/ a single pklaw or a few? Who does this guy play against anyway ... ?

I just hope it's clear that the advice given is both banal, sometimes wrong, and meant for people who have spent a significant portion of their lives drinking lighter fluid. Or maybe that's what his routine opponents do, I don't know.
Posted by Mike Brandt; mvbrandt@gmail at 5:43 AM