It's here! - Pumpkin Beer! But not just any kind ... THIS ONE IS THE CHUCK NORRIS OF SEASONALS 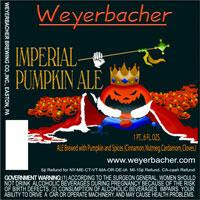 I introduce to you Weyerbacher's Imperial Pumpkin Ale. ("IPA" ... heh)


First, let me tell you about Weyerbacher Brewery. Wait, I won't, the link I provided can do that.

BUT EASTON, PA, NOW! That's where Weyerbacher is from, and truly it is fitting that the king of pumpkin brews comes from a town made famous for its complete and total disregard for Prohibition (being well-known and regarded for the ease with which one could find brothels and booze during that darkest of times in our nation's history).

Onto the beer. The first time I encountered Weyerbacher "IPA" was last year, when I came upon it in a dark alley beating the crap out of 5 muggers while simultaneously satiating the thirst of the poor old woman they'd been assailing. The wonderful goodness of pumpkin, cardamom, and nutmeg not only revived her, but gave her the power of flight. Off she went into the night sky, and off I went to Norm's Beer and Wine, to acquire some of this potent brew myself.

Have you looked at the label? No, my friend, you aren't high off the fumes from that last bit of gas you passed. It is indeed an angry pumpkin in an imperial cape with his mighty royal mace of righteousness raised high above his head in anticipation of a strike against evil and injustice. Drink some Weyerbacher "IPA" and that hallucination-inducing flatulence of yours will instantly take on the bouquet of cinnamon and alcoholic amazingness.

It is potent, approx 8.0% ABV. Hence the Imperial.

It is tasty, like ... I don't know, you have to try it kind of tasty. Hence the AWESOME AMAZING WONDERFULNESS listed in size 1 font under the label (a truly great brew must be modest).

It is rare, like ... you only have a couple of months in which to try it before it is gone for another year.


Go find some. For serious. If you're in the DC area, let me know you want some, show up to the next Whiskey40k night with cash, and I will bring it to you ... I like having it in my car anyway, as it renders my vehicle as impervious to harm as it if were covered in sheets of buckypaper.
Posted by Mike Brandt; mvbrandt@gmail at 6:05 AM