So, I took some pink foam, a few terrain piece type bits that were lying around (And that happened to match what I used for the Zoanthrope hover-assists), and put together a display board.

If I have time, I'll go have framing cut for the sides and back to better protect it. The front will remain as is for effect. I based it with foamcore underneath, so that it can slide around on textured tables and such easier w/out dinging up all the foam underneath.

This was quick and easy to do. As it was glue drying for the foamcore underneath, I mocked out where the models would lie on the dining table, and where the terrain would be, etc. Then I stuck it on the board. As usual, I'm using my droid camera on the fly, so apologies for poor picture quality! 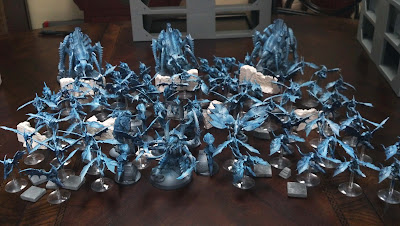 After the display dried underneath, I stuck on the pieces in the appropriate location. Once dry, it was on to base coating and airbrushing. 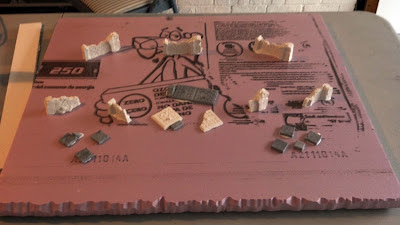 Airbrushing was easy, and I stuck with dark and simple colors plus some bright spots to make sure it contrasted well with the army (Which it does, though I Fear the pics don't show it well due to stupiddroid). 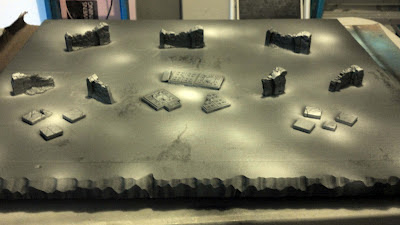 I wanted to have more than just black and white for the display, and I have a psychic power themed army, so I decided the hoverbugs and monsters would have a psychic "aura" in the appropriate color. I placed them, then bursted the correct areas using an aibrush detail attachment for some poor man's OSL on the board. 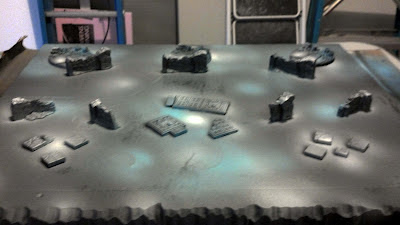 Here's placing the big guys back down, to show the point of the blue. 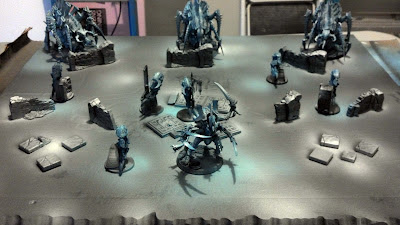 And here's all the models partying on the board. For display they go something like this. For moving around the tourney hall they jam much closer to the center together. 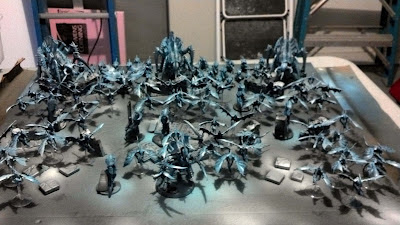 This sharing is meant for hobbyists like ME - people who aren't great at the artistic side, don't have a lot of time, but want a nice army that people will say relatively nice things about on the tabletop at a tournament or a local game night. You too can have a cool display board and a decently painted army in a very short period of time!
Posted by Mike Brandt; mvbrandt@gmail at 4:04 PM