I've been asked privately about why I'm bringing the Nids and what I think of them.

Also, my guard army is spread across the country, still being shipped back from being shot at for the KR/Basic Black video being worked on. Half the army, the half that actually got shot, came back from Florida ... the other half for some reason got left behind, because they ended up not using it as part of the demo (basically, they weren't miniature soldier guys, and couldn't figure out how to fit all the models in the cases the way they do, so some of them were left out of the bag when it took bullets to the face).

So, I don't really have a fully painted ready to go army anyway, but I DO like my Nids ... they were my first real army, and they're fun to play with, and I've wanted to bite the bullet and paint up a new army for a while now.

Daunting task to try and rush paint an army with a brush (I've never used an airbrush before on minis, only on terrain), but people suggested it so last night I went and tried to figure out how quickly and effectively I could get things done. The Airbrush Gargs ended up looking better than with a brush by far, quite poppy and effective, and I'm happy with this start point. There's a lot of detail that needs to be pulled out, but they look quite good for tabletop / tournament standard as is, so I'll probably try to bring the 100 models I have to build and paint to this standard first, and see where I stand in terms of time left before BFS. 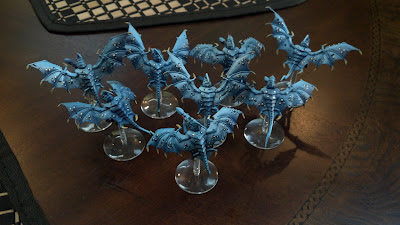 Here's a shot of the gargs I painted in under an hour last night.

I'm also permuting the army to give the Gargs furious charge, and dropping the Tyrant Guard to pull it off. I'll probably also put the Zoanthropes into two squads of 3, instead of 3 squads of 2. This will help a little in kill points (and also discourage people trying to kill them for "easy" kill points), and doesn't really inhibit their value at all, since Blessings and Maledictions don't follow the targeting restrictions that Witchfires do ... you can literally bless or maledict whoever with whichever zoanthrope in whatever order you like.


As an aside, these are the bases the army will be using, by Secret Weapon Miniatures, thanks to Grimlock/Jon for the rec on these:

And the Zoanthropes, by Troll Forged (just a random google image, not my paint, obviously given the color diffs), thanks to ghostin/Jamie for the rec on these:

Posted by Mike Brandt; mvbrandt@gmail at 6:41 AM