Balancing a Game - Competitive Balance vs. "Who Cares" / "For Fun" Balance - Mythology and Weirdness in 40k and General Game Design 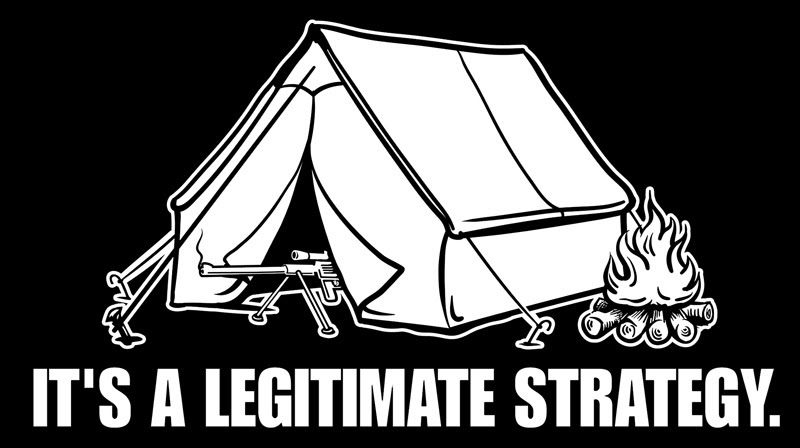 So, something that's always gotten my goat is the question of whether or not the tabletop wargame(s) we all play and love should be balanced with competitive hardcore tournament players in mind.

Let's think about this critically.

What makes Sisters Repentia cool?  Giant chainswords of doom?  Crazy bitches with holy rage?  The Lumperjacks of Battle, seeking forgiveness for their errors by treating the enemies of the Emperor like a crop of young saplings?

Having them walk across the board getting shot to pieces?  Costing too many points?  Not having a sweet anger-management ride to travel around in?

I'm guessing the latter parts have nothing to do with their cool and fun features.  I'm guessing further that if they were properly points costed, properly equipped, and properly protected / protectable (i.e. a transport) that they'd do two things - 1) not be any less fun, cool, beer and pretzels, fluffy, neato, etc.  .... 2) be more balanced and therefore loved by and functional for hardcore competitive tournament players.  Plus, more hard choices when building a dex, which is never a bad thing for sales OR fun (omg I can change my list whenever I like and the new plugins are still going to compete and I have to buy new models!).

What about the polish of the rules?  How many casual players do you think forbid Bjorn the Fell-handed from using his rule to re-roll the dice to go first due to there not technically being a roll to "select deployment zone?"  I think you'd agree it was more common among tournament players, that dispute.  If GW had better edited and polished their product prior to release, and listed that as re-rolling the dice to go first ... do you think it would have negatively impacted the casual players' games at all?  Of course not.

How about the Pyrovore.  What if it had a good armor save, could move faster in some capacity, didn't hurt gaunts when it died, had better stats or a better weapon, or in any capacity was competitively useful.  Would the model suddenly look hideous?  Would the tiny handful of players who currently use them suddenly throw them away?  Would everyone maybe consider using them, from the top to the bottom of the scale of player types?

Do you see where we're going here?  The things required to make this game air-tight and perfectly balanced for competitive gamers are NOT things that would in any way compromise the "fun" of beer and pretzels gamers.

Having the various unit selections in a codex be interchangeable, where your challenge is how to best use good units within a slot and mesh them with an overall army build, instead of simply nominating the "power" units and spamming them ... would also probably make the game MORE fun for everyone - casual players first of all.  No longer would they be faced with the intensely irritating dilemma of whether to take those ripper swarms that they thematically just LOVE or the "obvious" Tervigon and Gaunt troops.  On the rules front and the game front, you'd also integrate everyone better - no longer would you get into a fight over a hinky rules interpretation with a more "competitive" stranger at the local GW.

Frankly, the "competitive" and "fun" differences also don't exist in games that are more balanced and air-tight in their design ... you don't need homogeneity to accomplish it either.

I wonder if GW will ever pick up on what is largely an obvious truth here - that better and more competitive and balanced rules are better for EVERYONE, and more fun for EVERYONE, and reduce divisions within the hobby while increasing sales.  I wonder if the "casual" crowd will figure this out also.  The Dick Move blog had one of its Friday Night Internet Fights with a guy claiming there needed to be multiple versions of the game of 40k - a "fun" version and a "competitive" version and all of that.  I couldn't disagree more, and I think all of us would have more fun with everyone if we found a way to pressure GW or encourage them to build a better mousetrap.  Until that pressure is there, it'll always be a crapshoot and a hope shot ... and every codex will have those "suboptimal" units that no one spams or takes ... encouraging the super casuals to take them to be "different," and subsequently lament the "spam" present on the internet and among the "non fun competitive" crowd.


As always, the secondary point here is when YOU stop to criticize a "fluffy" or "competitive" player ... consider the reason they are how they are ... and consider it's the GAME, not the PLAYER, you should be hating.