OK, so the 8 on the 8th tournament went off on Saturday without a hitch, and everyone - at least at my location - had a great time.

There were some pretty potent lists brought to stress test the primer missions for the NOVA Open (that can be found HERE).

In order to appropriately protect the "details" of their lists in case they want to bring them to the actual Open, I'll just provide the actual units ... no points or excessive gear details.

These are the results also ....

OK, so most of the lists were decently optimized/tweaked to a reasonable degree ... and here's how they worked out "in brief" ... posts with photos and match details will come as available

Round 1 ...
Mark Ferek (Angels) vs. Tim Williamson (Tau)
Tim decided to "feed" squads to Mephiston while focusing on the rest of the army, and this didn't really work out ... he also chose to bubble-wrap "other things than broadsides" with his Kroot, and so Mephiston had an easy time getting to them by turn 2 with his absurd speed. Mark tabled Tim, while taking only a marginal beating ... and Tim learned all the lessons he needed to about the new Angels, which would prove valuable to his Tau later (he's a vet Tau player who has never gone up against BA before). FULL ALBUM 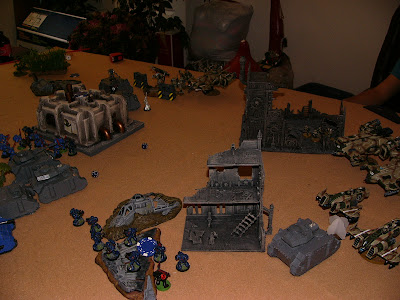 Mark Aksel (Wolves) vs. John Moore (Angels)
John's Angel list was pretty effective, but needed some obvious tweaking by tourney's end. It revolves around a lot of marginal but fast and effective enough threats all surrounding a 10-jump pack squad that consists of a reclusiarch, sanguinary, and 8 vanguard with storm shields and either lightning claws or thunder hammers. He knows it's silly, but it actually "works" for the BA sorta ... only against Mark it got hung up with a bunch of storm shield lone wolves and thunderwolves ... and was too banged up by the time it got out of there to function properly, and Mark's overwhelming number of grey hunters "swung" the rest of the battle in the interim. Bloody Game but the Wolves came out on top just due to sheer weight of numbers (2 lone wolves, 2 thunderwolves, 55 grey hunters, 6 wolf guard and bunches of vehicles). FULL ALBUM 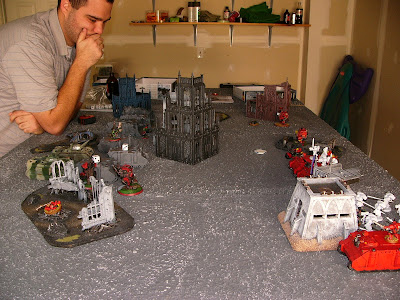 Ryan Holliday (IG, Darwinn69 on many forums/blogs) vs. Dave Gonzales (Blood Angels)
Basically Ryan suicide blew Dave's Land Raider early enough to make Dave's terminator death star (fnp, etc.) wade through a turn of point blank melta multilaser demolisher vendetta spam. Since Dave's army is largely built around that unit surviving, it broke the game. The rest of Dave's stuff took a toll on Ryan's units / vehicles, but with Straken in the game and the real heavy hitter of Dave's army taken out, Ryan had the superior ranged and close combat power to finish off the Angels. FULL ALBUM 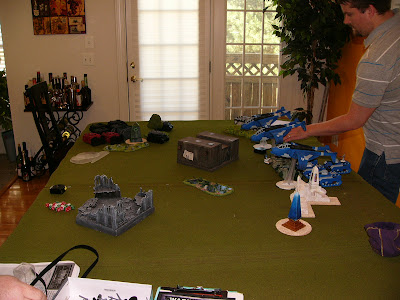 Joe O'Malley (Blood Angels) vs. Vaden Ball ("Sternbikers")
Joe's an old hand at this game, and has played Blood Angels for probably well over a decade or two ... since they first came out, many editions ago. He's the routine host of Whiskey & 40k nights on Fridays, for which this blog is named. Vaden went first and set up an excellent "all cover but you get none" wall with his Bikes and Rhinos/Vindies, and utilized Pedro properly to turn all of his bikers into Veterans and his command squad bikers into "lots of attacks dudes" while supporting things with the vindies and sternguard. Unfortunately, he made some mistakes late that Joe capitalized on, after Vaden had already "engaged" the line ... namely, in order to utilize an orbital bombardment and underestimating Joe's priority decisions ... he walked some Sternguard away from Pedro and left his +1 attack aura alone on a building top. Promptly Joe pointed a lascannon pred at him and "smoke" there went half of Vaden's attacks in point blank combat w/ a blood angels army. Joe also managed to get some lucky "breaks" tank shocking bikes, and escorted most of Vaden's army off the board. Unfortunately, every time Vaden lost a combat by even a little, he'd fail his stubborn LD test, win the I test to escape combat, and get escorted off the board by fast BA vehicles w/their guns blown off. There was also a key turn where every one of Vaden's meltagun shots hit, penetrated rhinos and ... killed storm bolters.
FULL ALBUM 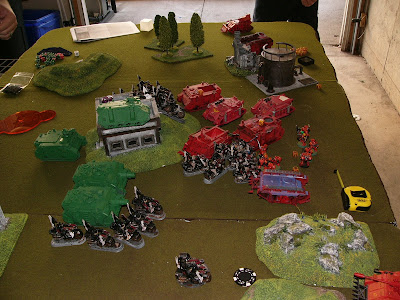 Rounds 2 and 3 and pics coming later ... (work beckons)
Posted by Mike Brandt; mvbrandt@gmail at 5:37 AM