Note: this thread intentionally includes unvarnished opinion, and to prove the overarching and still-resonant "keep calm and roll dice" intent, take it with a grain of salt!

Just so people are aware, b/c I keep getting asked, NO we are probably not going to be following the big small wave of OMG MAKE MANY CHANGES that seems to be the rave right about now.

1) Formations, or really, the Tau formation. The only reason this presents a problem is there will be / are people already hovering over the order button to build 19 interceptor missile broadside armies supported by tons of scoring kroot and riptides, merrily ready to roll a million dice at you and clear you off the table. These should probably be looked at to avoid the ridiculosity of it. That doesn't mean they should be removed or banned or anything conclusive at present. Just ... looked at.

2) The newest supplements to standard 40k (To go alongside existing supplements to standard 40k like Forgeworld, Planetstrike, Cities of Death and Apocalypse). Just b/c a few blogs with their own agendas reported them with a massive spin of THIS IS MEANT TO BE PLAYED BY ALL PEOPLE WHETHER YOU WANT TO OR NOT IN EVERY 40K GAME ... doesn't make them any different than any other supplement to the core rulebook + codices. They're official, they're supplements, that's that. Whether to allow them or not is at the discretion of any given player and any given tournament.

In terms of expectation setting, while it won't be our guiding line, adding Escalation and then immediately banning a portion of it seems about as bass-ackwards as one can imagine (I'm talking about the people going ... well it's OK but ban D weapons!). If the supplement is an untested copy paste bunch of BS ... why are you using it at all? Further, if you're banning D weapons, all you're doing is adding something to the game where more casual gamers will take their awesome expensive models and be yet again disappointed that they aren't any good. If you ARE going to legalize it, legalize it all the way. You might as well legalize FW but ban individual units, as legalize any other supplement then ban certain parts of it. Cherrypicking it into the game is asking to upset everyone - purists will be angry at the internal comp to the legalization, people who realize it's an untested piece of crap cash grab will be upset you're legalizing it at all, people who want to use their fun D-weapon Thunderhawks and Revenants will be upset at you, casual gamers will be upset when they realize their expensive toys aren't any good, etc. etc. etc. Or you just say "hey we don't use that supplement in some of our events" and magically you've got a simple resolution. Alternately, say "hey we do use that supplement in some of our events" and there you go, also simple.

Voidshield Assault is similarly problematic, maybe in part b/c it's just inviting power gamers to ... well ... power game even more. The more untested potentially powerful variables you add to the game, the wider the gap becomes between those who are willing to invest the time and money into it and those who aren't. This worsens experiences. Since it is written explicitly as a SUPPLEMENT to the game and not as a formal modification to the extant rules ... why legalize it at all? Are people really going to miss getting to scratchbuild models for which there isn't even a designed template yet? I don't get it.

3) Fast moving kill-all units with 2+ saves that can be re-rolled. If Shadows in the Warp hasn't changed (TBD, but actually seems it might not have been) and Tyranid are powerful/popular (some rumors seem to indicate they might be!) ... you don't need to do anything about this. Even the closest major event, Las Vegas Open, will have the Tyranid rules legal for it ... which means no major event needs to make a rash judgment on 2+ re-rolls right now. We can just all acknowledge unkillable super fast units that can kill anything are really annoying for most players to deal with, and generally aren't very engaging.

To the person out there thinking "oh come on there are like 5 hard counters to each of those!" Stop it. We don't design tournaments for you. We design them for the 200 people who DON'T spend hours problem solving every possible combination. This is also why you want to keep it simple for those players, and not add even more crazy combinations to the game IF YOU DON'T HAVE TO. If GW releases a new Codex, you kinda have to add it to your tournament. If GW releases a supplement that tells you how to play with apoc units in a regular game if you want to ... you actually DON'T have to add it to your tournament. You're free to, even encouraged to if it suits you and your attendees, but you don't HAVE to. You'll also find with a little critical thinking ... doing so might actually hurt more people (especially laid back gamers) than it enriches.

Also, just b/c a lot of people take Trick Commanders doesn't mean you should ban them or try to nullify where they can be taken. The same can be said of Riptides and other things. These are powerful models in the game of 40k and are themselves fairly killable. This jives with the game as it's been for A VERY LONG TIME. 35/36 save odds and hit and run and 48"/turn movement is NOT precedented at any time since Rogue Trader. Really mean shooty units that lots of people can and will take ... ARE precedented. Deal for a bit on those, please.

So do I have a firm opinion on these? No. Do I have an opinion on these? Yes. Will I be making any kneejerk rulings? OF COURSE NOT. Will I be making any rulings on my own as a random guy? Nopers! I'm looking forward to a telecon with a ton of TOs in January, and to keeping an eye on the evolving situation while LOL'ing at the wig-outs. But since I keep getting asked today "ARE YOU GOING TO FOLLOW SUIT AND START BANNING TONS OF THINGS AND TWEAKING THE RULES AND ADDING 0-1'S AND STUFF?" NO, probably not. We might do some things, but we want to do them in unison with a broader range of events (hey, wouldn't it be cool if like a half dozen or a dozen major GT's all had the same ban/legal list instead of every event doing it differently?), and we want to do them under the lens of critical thinking, group-think that isn't just internal-to-the-GT-yes-men, and with a little more patience than THE INITIAL REPORTERS SAID THEY HAD TO BE USED IN STANDARD 40K SO I GUESS WE HAVE TO???

Additionally, we'll be sending out a very carefully-crafted survey to our 1500+ newsletter distro in January, and we'll be running all of our initial ideas (even if they are "no changes at all!") by same attendees once decided upon, so that we're making decisions in a way that isn't just "some smart people brainstorming" but is also reflective of what our paying players actually want.

Yes, I totally abused my caps lock in the creation of this post. 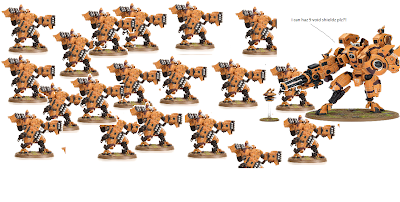 Long story short btw - if you folks with tournaments right around the corner losing your minds just say: "No Escalation, Voidshield Assault, Formations" + "TBD on 2+ re-rolls" you'll save yourselves a lot of headache. Jumping from "omg these just came out what do we do?!" to "FULL ON COMP AND BANS EVERYWHERE" is probably needless. This isn't even because it isn't necessary, who knows but that it is, but when you do it so aggressively and everywhere ... it SMACKS of reckless abandon instead of reasoned TO'ship, and that's a disservice both to the PR of your event and consideration for your attendees.