So, I finished the paint job on the Eldar / Wolf list. Mostly. A lot of the models could probably use more detailing, but all of them have pop and a little bit of flair.

They're based on Micro Art Studios Wraithstone Bases

KR Multicase was my source for casing (as usual perhaps). I was able to fit a Land Raider, 6 Wave Serpents and 55 Infantry into two of their Card Cases with a lot of room to spare/grow.

This lets me pack them into just one Kaiser2 or BackPack2 (I have one of each), so it'll make traveling to BFS pretty easy. For comparison, the Tyranids require both the Kaiser2 and BackPack2, AND still have a spare Card Case on top of that. KR cases are the best in the business, by a wide margin (having tried the big ones available), in terms of foaming up and carrying your army around the country. I will say there's a TableWar KickStarter that's intriguing using a smaller case, for those of you who want a cool display to go with you around a con. 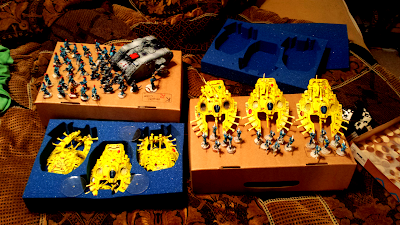 Point is, with an efficient system like KR, the Tyranids still require 150% more traveling material than the Eldar ... feeling justified in my choice already. I'd also like to clarify that the Eldar list I'm bringing is a good, strong list ... it's just not as meta-ready and meta-busting as the Nids would have been. I hope my prior post didn't come off too much as trying to claim the list is a fluffy underpowered one ... so much as an aesthetically pleasing but still well tuned one. 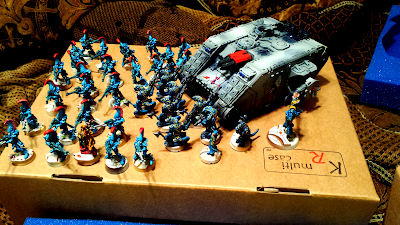 Posted by Mike Brandt; mvbrandt@gmail at 7:04 AM