After my Round 1 loss, I successfully fought back up into the "Gold" / Championship bracket for the BFS.  I scored well on sports and appearance, and earned nearly all possible quarters/objectives/vp in rounds 2-4, so I knew I had a "shot" at Best Overall.  Best Overall was determined at BFS based purely upon the first 5 rounds, after which players were eliminated and Ren Man / Overall scoring ceased.  So, I had to win my first round in the Gold Bracket.

My opponent was to be Jorge Ruiz, a fairly successful BA player from the NE region, and a NOVA Invitational attendee.


Jorge was running the following:

Mephiston
Reclusiarch with I forget what


This is actually more of a nightmare style list for me than I really want to deal with, for the simple reason that if he can get his Death Company, Assault Squad w/ Priest, and Mephiston across the board at me ... they in addition to an "I'll probably cross just fine" Mephiston were going to ruin my day, especially in the mission.  I have a lot of meltaguns, and Straken can handle A squad/threat just fine, but when you hit me with 5 deep striking th/ss terminators *and* Mephiston *and* death company w/ a reclusiarch *and* a full assault squad ... well, things get hairy in a big damned hurry.  Alex Fennell used this very fact against me last year at the BFS to nearly take me down in the Semi-Finals.

SOOOOO ... onto the game.  Dawn of War / Kill Points, and I forget who won the roll but I went first.

Al'Rahem and Marbo reserved b/c they were required to
Straken and his 5 Chimera Vet guard rolled on Turn 1 on the left side of the board.  The 3 Vendettas "fast moved" on, relying on cover saves and dawn of war to stay safe.

Jorge banked perhaps on Al'Rahem not arriving on Turn 2, so he rolled onto the board with everything but his Speeders (simple reserved) and his Terminators (deep striking).  He put one rhino (assault marines) and one razorback (assault marines) in front of a 2 wide / 3 deep choo choo cover train, doing his best to place the middle LOS blocking terrain (a bastion in this case) in between my Chimeras/Vendettas and him.  He put his Autolas predators in the back, with the 2nd razorback and the death company rhino in the middle.  Hmm, I'd better make a Vassal image here ... 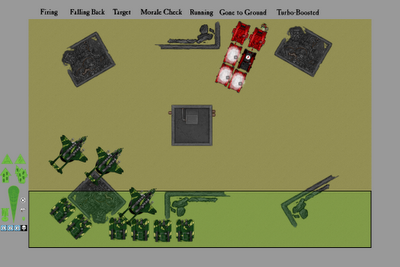