Flash Alert on Events Running Out of Room. Plus, Badass Star Destroyers are Badass.

Some updates for last minute lucies ... grab one of the spots listed as barely left below at http://novaopenstore.com

Several other seminars are down to two or three spots left

Unlike previous years, it will be very hard to "walk in" to any seminar you want ... 92 people presently are registered for just seminars and nothing else, and the # who are doing other things AND seminars is much higher.

Blood Bowl - the Saturday SlaughterDay! event only has a couple of spots left

Wyrd's first ever National Championship, head judged by the guy who designed the game, Wyrd's Justin Gibbs, has 1 spot left.
The Capital Carnage Story Encounter sold out, but we opened a few more spots.
Most of the other Malifaux events are sold out or nearly sold out

Warmachine went gangbusters this year, and FFG is sending folks to join us! There are over 100 WM players registered. Hardcore, Steamroller 2015, and Tierany are nearly sold out. The team event sold out, but we were able to one-time up the slots ... and there are only 11 team spots left.

X-Wing is sold out in every event except the Championships. The Championships sold out, so we upped them to 96, but now we're out of room. X-Wing also features one of the coolest showpiece items we've ever built:

The Lord of the Rings GT is ... running out of room. 32 are already registered for the GT, with attendees from England, Quebec, and across the US. Yup, LOTR. Terrain and display features that have been seen in WD and elsewhere by Wright Wargame Terrain will dominate the center of the LOTR gaming area ... should be a real treat!

Last year's NOVA saw around 860 people attend, including what we call "daywalkers" who just show up not pre-registered and snag passes or seminars and the like on site.

As of today, there are MORE than that # registered for NOVA. It's already our biggest year yet ... don't miss out!

For those who aren't straight tourney gamers or seminar takers or speed painting competitors or vendor deal shoppers ... we also have a board game room this year, where you can play any of over 150 board games (Thanks to Atlantis Comics and Games!), including checking them out (ID swap) and going wherever you feel most comfy playing them, or picking up games with friends or strangers in the board game room itself! This'll be active all con long.
Posted by Mike Brandt; mvbrandt@gmail at 1:06 PM 10 comments:

We're VERY, very excited to be joined this year by lead designers, reps, and more from numerous parent companies of the games we're hosting, including:

Many of these folks have also been kind enough to volunteer their time for free industry chats and personal time with fans in the Charity Lounge, and will be around the con throughout the weekend.

Adding a Little Fun to the NOVA Invitational


This year, we're hosting our 5th NOVA Invitational for 40K.

We wanted to spice things up, so it's a little different this time around.

First and foremost, it's an Elimination/Knock-Out Event. This was actually done mostly for Invitational players themselves, who tend to not enjoy 5 rounds of 40k if they lose one or two early when they have another 8 to go in the GT during the same weekend. So, we've changed it - you're either still in it to win $1,000, or you're in the clear. Those who wish to still play more games against top tier opponents will have the freedom, tables, and even events (in the form of Highlander Quickenings) to do so with.

Next, we canvassed the global community and involved more folks in making the event back into a true Invitational. The original event was, but in the interim years it's become more of a haphazard qualifying system, whereby you could be invited if you won a major event of some kind. The hiccup here came when players who won events could not attend at the last minute, resulting in us scrambling for whichever subs we could find. Instead, we took the sum total of a players' efforts into account, canvassed the West Coast and other locations for inputs on who the top players of the times are, and reached out for those who were well-qualified, interested, and - importantly - able to actually attend.

Finally, we seeded the field and are creating a bracket on Challonge.com
The community as a whole will be able to see players, their chosen Factions (army lists will remain secret until go time), and their seed / first round opponents / bracket path, and participate in a bracket challenge. The seeding was done poll-style by a combination of myself, Neil Gilstrap (11th Company Podcast and this year's NOVA 40K and Invitational Head TO), and Reece Robbins (head of ITC, Frontline Gaming, LVO, BAO, etc.).

Since the event is single elim, 5 rounds, with 32 players of roughly equal skill in a dice-based game, seeded pairings don't have much of an impact beyond that already incurred with random pairings (the only alternative). Taking this course adds more interest to the Invitational, and enables the community at large to participate by submitting bracket selections and the like.

We'll be revealing the brackets and the seedings shortly, but here's this year's finalized Invitational Roster, in Alphabetical Order:

Who do YOU think will come out on top this year?
Posted by Mike Brandt; mvbrandt@gmail at 11:31 AM 5 comments:

Why Haven't YOU Signed Up for NOVA Yet?

Biggest year yet already, by far, and registrations are still flying off the chain.

Also, it's our first year of really adding more and more stuff "just for your con pass," including nearly 150 check-out-able board games and a board game room, an embellished charity lounge, a bunch of magic stuff, more open gaming than ever, and "just really cool stuff" around the halls.

Posted by Mike Brandt; mvbrandt@gmail at 10:46 AM 5 comments:

Couple of Mat notes and some REALLY AWESOME artwork ...

You can still preorder F.A.T. Mats for pick-up at NOVA from novaopenstore.com, saving you the cost of shipping. F.A.T. Mats are produced by Frontline Gaming / Tablewar.
Presales end on August 20 and you CANNOT purchase them on-site

Additionally, the NOVA has a couple of limited edition NOVA Open tagged mats that were crafted for this year in X-Wing and Magic: The Gathering. As of now, these can ONLY be acquired on site at the NOVA and will only be available in limited quantities! 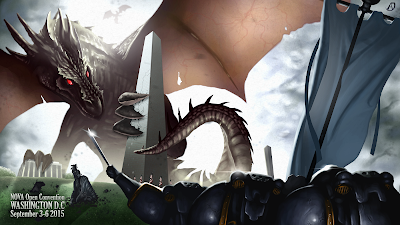 Posted by Mike Brandt; mvbrandt@gmail at 9:08 AM 3 comments: