The first draft of NOVA FAQ v6th.1 is linked below.

A couple of guide rules and heads up:

1) This is a DRAFT document; I'm still working heavily on formatting for clarity and polish
2) Some and/or several rulings you WANT to see may be missing
- Some may not be in there because they do not suit the purpose of the NOVA FAQ (i.e., the rule is answered clearly in the book, and is a "frequently" asked question due to people not reading it carefully)
- Some may not be in there because we've simply missed them
3) Some and/or several rulings may be what you believe to be INCORRECT

We will release the FINAL version of the FAQ for 2012 on August 1 or sooner. Please read through it, and follow the instructions in the Introduction for getting your questions or challenges addressed and potentially added to the FAQ by that deadline.

As a general rule, most of the large questions regarding how to prepare your army should be answered in this DRAFT document. You can rely on the fact that further changes will be marginal, and must be very well argued with clear construction and minimum emotion.

The finalized version of the FAQ will go out in the August 1 newsletter. The longer you delay in reading through it and posting any additional questions / clarifications / arguments, the less chance they will be addressed in time.

Meanwhile, we will continue to canvas for major questions that require entry into the FAQ through our own update deadline.

Remember, the NOVA FAQ is the opposite of the INAT FAQ (which I am a proud council member for). It is intended to be a streamlined tournament-ready minimalist document answering the largest and most pertinent questions for both gameplay, and in help constructing lists safely (in terms of how fuzzy rules actually will be ruled). It is NOT intended to answer every loophole and possible question out there; that's what our judges are for, and we rely on larger rules documents, and our own exhaustive playtest and communication to be well prepared for each of these. The NOVA Rules Forum can also help make sure judges and staff are well informed of and ready for the more esoteric or rare rules questions; furthermore, they provide you an opportunity to have these questions answered by and communicated with NOVA Open staff and judges.

We are releasing the DRAFT FAQ for two reasons:
1) To give you as much lead time as possible
2) To give the community as much opportunity as possible to continue to be a part of the iterative improvement process of the NOVA Open

Enjoy, and thanks for your patience! We're doing our best here - the ONLY benefit to us for running the NOVA is seeing the community bettered, and our attendees happy. Helps us out in that goal as much as you are able!

Grex Airbrush will be a NOVA Open Sponsor and Vendor this year. They'll also be demo'ing their airbrushes live from their vendor booth.
http://www.grexusa.com/grexairbrush/

The Painting Competition is going to have AWESOME prizes this year, as a result of Grex and others:
Each of the 6 Paint Competition category winners will take home one of these:
http://www.grexusa.com/grexairbrush/products.php5?id=Tritium.TG 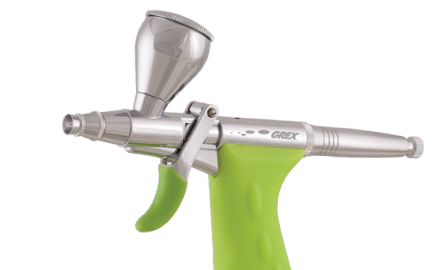 In addition to sizeable gift vouchers from Secret Weapon Miniatures, and a number of additional perks and prizes, the Paint Competition is already at ENORMOUS prize value for every category in only the first year of the event. Sign up for it now! It's cheap to do so, and there's no reason not to ... for $10 you can submit to all 3 sub-categories for either the Sci-Fi or Fantasy genres (they also cover/are inclusive of other games, and indie line models). For $15 you can submit to all 6 sub-categories (the 3 from each genre).

Next up, Tectonic Craft Studios will be Vendoring at the NOVA Open this year:
http://www.tectoniccraftstudios.com/

Tectonic is one of the new successful results of the rise of Kickstarter, a company begun from the ground up by YOU all as hobbyists and investors. From my talks with Dan at Tectonic, the beta launch of their full site will be coming shortly in August, and the NOVA will be the first major convention they're selling at. He's giving us some fantastic shwag, and also loading up some of our Warmachine and Hordes tables with some rad-tad terrain.

Dan's stuff is in high demand, with a long wait list of invested kickstarter customers, and new ones lining up ... you'll have a chance to win some, or buy some at the NOVA this year.


The Narrative Primer is being worked on. An unformatted DRAFT is included here:
http://www.novaopen.com/wp-content/uploads/2012/07/Narrative-DRAFT-Primer-and-Rules.pdf

We're working on finishing up the FAQ; I'll be doing the draft of our conglomerated rulings today, running it by the 40k head judge for final inputs, and then publishing it out.

Do note - we will put the FAQ in your Guidebooks also, along with GW FAQ's as printing costs allow, and a quick reference guide to big new rules / changes for 6ed that we're working on. This should make your lives easier come game day, in terms of looking up rulings / rules / etc.
Posted by Mike Brandt; mvbrandt@gmail at 7:03 AM 8 comments:

One of the things we've noticed and heard about in playtest is the impact of the new Scoring/Denial unit rules, and Flyers/faster moving units, on how we work our Quarters Mission.

Beginning players tend to initially think that Quarters plays like Fixed Objectives (where one is in each quarter of the board). As people become more veteran with the best / most effective way to play the mission, they realize it's the most "engagement"-encouraging mission, as controlling the center of the board with large numbers of Points is the best way to ensure a win (and not a tie), giving you the ability late in the game to shift points to ANY quarter, instead of just to one or two (if you are backboarded, or segmented into board quarters).

The Primer contains a rules change that does a couple of things:

1) In line with the new 6th Ed book, only Scoring and Denial units count toward the Quarters goal
2) In select missions, the Quarters goal is modified along the lines of Big Guns Never Tire, and the Scouring, so that FA/HS will occasionally COUNT as Scoring for purposes of the Quarters Goal

This means that in general, vehicles of any sort do NOT count toward Quarters. This reflects the changes of 6ed as a whole, but it may also impact things TOO much.

Here are my big issues where we don't want to see Quarters as a goal change from the primer:
1) Flyers won't count for scoring in Quarters (unless you're in the Scouring or Big Guns Quarters variants, and have FA/HS flyers)
2) Emphasis placed on board control, engagement, while still being "tie"-able if you're outmatched on the mission by an inferior opponent with a better mission-tuned list


Inputs ahoy ... the only permutation I'm looking strongly at right now is simply ruling that Flyers and Vehicles [and Monstrous Creatures?] moving 13+" net in the turn (so counting run move) do not count for Quarters (so hovering flyers could count, transports/etc. could all count, but none of them could count if they moved flat out, zoomed, etc.). It could be simplified to simply be that Flyers do not count for purposes of the Quarters mission.

Do note, for newer input givers, EVERYTHING has always counted for the purposes of the Quarters goal, and this is a HUGE balancer on the mission combo. So, permitting all but Flyers would still be more restrictive than historically. One of my concerns in terms of gameplay and mission balance, is preventing a situation where it is tactically "wise" to run all your flyers off the board on Turn 4, and simply "zoom" all your points to whatever quarter(s) you want from off-board (aka in a way your opponent can't anticipate or play to handle) on Turn 5.


PS - Looking at removing Warlord Traits from the Primer as well.
PPS - Looking at possibly going with 5e Spearhead Deployment instead of Hammer and Anvil. If we stick with modified Hammer and Anvil, reserves will arrive along short edge, and outflankers will be determined by long edges.
Posted by Mike Brandt; mvbrandt@gmail at 8:16 AM 42 comments:

This link contains our 40k newsflash.

Contained within is our primer for this year's GT, Invitational, and Trios missions.

Please note, points levels are for the GT and Trios "singles" only. Invitational remains at 1750, Trios doubles lists remain at 1000 each.

Rationale behind some changes so far:


Hammer and Anvil Deployment Modification
This is a difficult one to have function properly in a tournament setting, b/c of the inherent logistical nightmare of 256 wargamers constantly running around 128 tables trying to fully use the short-edge, along-the-table deployment and play type. Hence, we've shortened the depth of the deployment zone somewhat, to at least ameliorate the process a little without dramatically altering the "feel" of the playstyle.

Please provide feedback and playtest results in the comments section or the forum! NOVA FAQ for sixth edition is forthcoming. The more input you provide that is of a constructive nature, especially backed by playtest, the better the final packet will work for all involved.

Posted by Mike Brandt; mvbrandt@gmail at 5:12 AM 36 comments:

Just a quick post, with larger one due later with the first primer work, and rules leanings, but please - any major rules discussions, questions, thoughts, etc about sixth and NOVA, go register and post them on the forum:

It's been cleaned up and protected from ye olde bot fest, and is ready for your use to help prep for NOVA. Forums are a better way than blog to track key discussions and sub discussions, etc.
Please also re share there some of your thoughts and questions from the last two major response blog posts (84 & 78 comments is a ton, and I do worry some great points are being missed).
- Mike, back from Amsterdam

Published with Blogger-droid v2.0.6
Posted by Mike Brandt; mvbrandt@gmail at 4:32 AM 3 comments: